Rewatching a favourite series can be a great experience. But it can also be kind of scary. While it’s an oportunity to revisit a show you love with a little more experience, and maybe discover some things about it you wouldn’t have picked up on last time around, it’s also inherently risky. What if it sucks? This year, after almost half a decade, I finally got around to rewatching Higurashi no Naku Koro ni. Back in 2011 when I started to really get into anime for the first time Higurashi was one of the first few series I picked up, on a friend’s recommendation. I loved it, it became one of the series that more or less defined my tastes in anime for the longest time. It’s definitely a series which benefits from rewatching and seeing how neatly things fit together with the benefit of knowing what’s to come. I ended up watching it 4 times over the next couple of years, alone and with friends, every rewatch just served to reinforce that love.

And then I stopped. I continued to follow the manga, which was conveniently being released in the west around that time, and is quite honestly a better adaptation. And once that was done? I put the series aside. Having given me so much joy over the years I felt like I was done with the series, after a lackluster series of OVAs I didn’t even bother with Outbreak in 2013. Not because I’d come to dislike the series. I just felt done with it, my obsession had in some ways run its course and I was happy to leave it there.

In spite of this though, I always did plan to return to the anime one day, I still loved the series, when I started collecting figures and other merchandise I’d always keep a careful eye out for more Higurashi stuff and it’s always something I enjoy talking with others about. Even the name Hainiryun comes from a long-standing mistranslation of Hanyuu’s original name.

I would have gotten to it earlier, had I not been holding onto the futile hope that there might finally be an official UK release after the US got a rerelease in 2016 but with that becoming increasingly unlikely over time I decided that this year I’d finally bite the bullet and revisit that isolated village that so captured my heart before.

And I found myself worrying as I finished up the show I was planning to get through before it. What if it sucks? What if by comparison with the hundreds of other anime I’ve finished since I last saw it the whole thing just doesn’t hold up? What if I just find myself comparing everything negatively to the Manga? 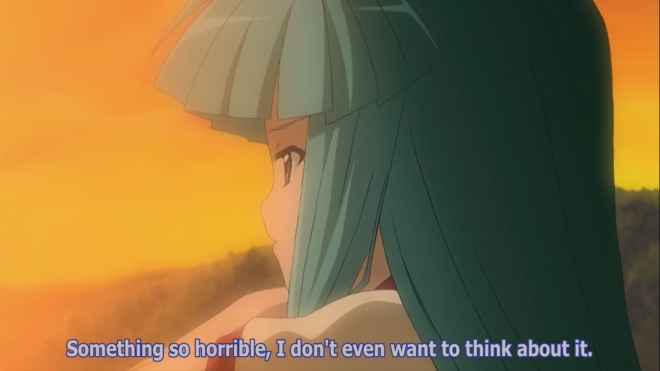 In the end this wasn’t the case, I loved it just as much as I always have. The flaws are still there, the first season’s janky animation is as janky as ever, the particularly skeevy bits are as creepy as they always were, but that doesn’t matter as it turns out. All the things I loved are still there and shine as brightly as they always did. I even picked up on one or two things I missed the first four times, and found myself liking the first season a lot more than expected, having come to view it as a flawed bit of necessarily preamble to the good stuff.

Rewatching a favourite series can be kind of scary. But it can also be a great experience.