Overman King Gainer has a lot of characters. It probably has more characters than are strictly necessary for its central story, but they sure are important to its secondary one. While the main crux of the story is protagonist Gainer getting his life together and coming to terms with his parents death while defending the Yapan Exodus in the titular mech King Gainer, it’s also a show about the Exodus itself. While Gainer takes center stage King Gainer is at its heart about the journey the people of the Exodus are on, searching for a new home in a world of seemingly endless frozen wastes.

Viewed from this angle the many seemingly superfluous characters are actually integral to the series, because it’s as much about the people living within and interacting with the moving city as it is about Gainer. However this extensive cast of characters does mean that many of them have very little screen time, and the show puts in a surprising amount of effort to ensure this time is used well, background characters have their own things going on, rather than just existing to interact with Gain, Gainer and Sara. All this is exemplified by one character, who isn’t even a character, Mammo the stuffed Mammoth. 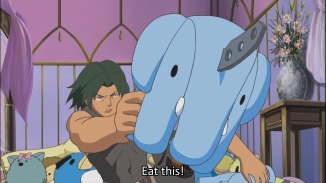 Mammo is a toy Mammoth belonging to Princess Ana; the Exodus’s (willing and extremely enthusiastic) noble hostage. Early in the series Mammo is caught in the crossfire of an attempt by Adette Kistler of the Siberian Railway (the orgainisation which essentially controls that region of the world and has a vested interest in stopping the Exodus to maintain that control) to retrieve Ana. Having been foiled by Gain, Adette lashes out and throws a knife at him, which he avoids by grabbing the first thing he can as a shield, which turns out to be the unfortunate Mammo, one of Ana’s toys. While Adette retreats (and goes on to integrate into the city, becoming a teacher and moving into Gainer’s house, much to his chagrin), it comes at the cost of poor Mammo. Clearly the unfortunate pachyderm plushy is doomed. It’s a fun scene in and of itself, Gain stopping to apologise to Ana (and Mammo) mid fight is delivered well and it’s an effective comedy beat for a throwaway scene.

And then Mammo comes back. A few years later Mammo makes another appearance, sporting a large bandaid. While entirely uncommented on it’s a nice callback, Mammo clearly survived his injury, and Ana took the time to help her prized toy recover. Mammo later appears again, this time having replaced the bandaid with a fetching heart shaped patch. Silly as it is Mammo serves as a good example of the kind of work King Gainer puts into its characters. Aside from the first incident Mammo is never outright referenced, it’s just there. But with only a single line of dialogue and a few appearances as a prop the show manages to do a lot. Mammo is clearly one of Ana’s prized possessions, she’s distraught when it’s damaged, takes care of it and eventually has it repaired, all of this happens off screen of course, because we don’t need to see it, we get just enough to infer what happened, which helps establish that Ana is her own person, with her own life outside of when she’s on screen interacting with Gainer and co. There are a bunch of other similar cases which build to create a cast of characters who feel alive and relevant, even when their actual roles are fairly minor, they all have their own things going on.

And now I’m going to go watch the amazing OP a few times, see you tomorrow.