I debated for a while whether this post should be day 1 or day 12, as it’s something that’s been a huge part of my anime watching for the last year. Ultimately it’s going to crop up on this list a lot, so it makes sense to use this as a kind of intro for what’s to come.

One of the first series that really grabbed me when I started getting more into anime back in 2011 was Macross Frontier, a weird show about transforming fighter jets and idol singers. At the time I was mostly simulwatching with a friend, and we picked shows mostly on a whim, Macross F only appeared on our radar because of a clip of a silly song.

This being as good a reason as any to watch a 25 episode series we jumped right in, and I loved it to bits.  In the years since I’d looked back on it fondly but never actually gotten around to watching it again. Howver, with the franchise’s next once a decade TV series (Macross Δ) looming on the horizon I decided to do just that, and go one better, watch the entirity of the Macross franchise. 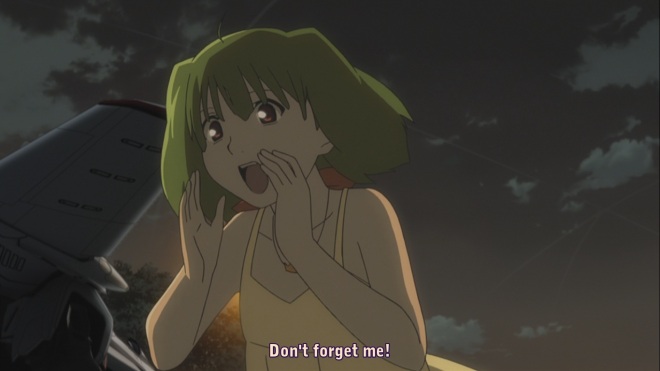 It was a heck of a ride and I’m glad I did it, Macross is wonderful and I love it to bits (except Macross II, we don’t talk about Macross II). I had planned to try and finish the entire thing before Delta started airing, but that didn’t pan out. Watching both the old and new parts of the series alongside one another was a special experience in and of itself though.

If it weren’t obvious, I’ll be going into some specific moments from the series that really stood out over the next 11 days. Although, I promise they won’t ‘all’ be about space idol mech dogfights.