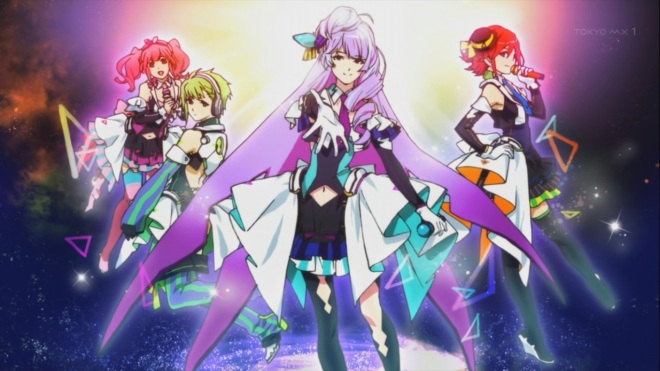 I like Macross Delta a lot. Mostly. Whilst I have some major issues with how the story ultimately ended up going, and the way Windemere and the ultimate antagonist were handled. As a whole, I love it to bits. In particular, Walkure steal the show. Generally the franchise focuses on solo idol singers, with the only outlier (Macross 7) focussing instead on the rock band Fire Bomber. So it’s nice to see a return of the group dynamic. Walkure owe a lot to the other musical group from 7, the Jamming Birds. In a way, Walkure are the Jamming Birds perfected. Where that group was really just there to show that the power of music isn’t something that can  be manufactured, and has to come from the heart. Walkure are exactly the same; a manufactured, weaponized idol unit.

In spite of this, Walkure succeeds where the Jamming Birds failed, because unlike that group they’re more than just a product. Where 7 brushed the Jamming Birds aside as comic relief, Walkure, being the core focus of the show are allowed to evolve beyond the constraints of their origins. Initially, Walkure don’t achieve much of anything, because why would they? None of the group’s initial lineup have any solid reason to be there, they’ve mostly just been roped in because they fulfill the arbitrary requirement of having Fold Receptors. It’s not until the addition of Mikumo, who seems to literally exist to sing, as its center that the group finds success.

Makina and Reina find purpose in one another, and Kaname finally gets over her lingering reluctance midway through the series. Freyja is unique in that she joins with a clear intent; She wants to share the feelings music manifsted within her with the galaxy, and stand side by side with her idols.

Macross Delta is a series that’s inherently about legacies, everyone in the show is to some extent shackled by what has come before. Delta allows Walkure to come out from the shadow of their precursors failures, and their own cynical inception, to become something special. In this way they come to be the show’s thematic core as well as its focus.

Of course, it doesn’t hurt that their music is really, really good.