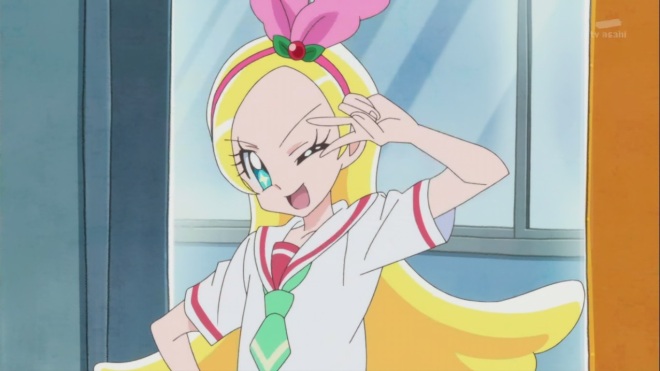 Adding a new character to an existing team can be a hard sell. They need to bring something new to the table to justify their inclusion, whilst not being so overpowered as to completely steal the spotlight. For a show with a roster that at the time already felt a little over full, Kirakira Precure A La Mode handled this surprisingly well with Cure Parfait; by making her a massive screwup. Introduced as a genius Pâtissière from Paris, Ciel Kirahoshi spends the episodes following her introduction acting as an unattainable standard for main character Ichika, whilst Ichika eventually does manage to prove her worth to Ciel and the group as a whole slowly becomes closer to her, the gap in skill remains obvious, she’s just plain better at making sweets than the other girls and retains a certain degree of aloofness as a result.

Eventually it’s revealed that Ciel is in fact Kirarin, a fairy who traveled to Paris to learn the art of sweet making, ultimately becoming so good at it that she was able to attain human form.

She’s also a massive Precure fangirl, with her infatuation with the protagonists and desire to equal them becoming the first crack in her unassailable superiority by flipping their everyday dynamic on its head. This only come to a head however, when she too becomes a Precure.

At this point, Ciel’s on track to steal the show. Not only is she the best at sweets, she’s now a Precure, removing the one thing the other girls had over her, she’s the one with the fancy new finishing move, replacing the previous team effort with a flashy solo attack. And then she goes to school.

Ciel’s transfer into Ichika’s school initially seems to fit the usual tropes, the perfect new transfer student outshining the existing students and rapidly gaining the admiration of her peers. Until she starts to slip up, innocuously at first by answering a few questions wrong, things really go south when she forgets to eat, inadvertently reverting herself to her fairy form, and spends next the few minutes of the episode fleeing from a horde of school girls determined to catch the mysterious creature that just replaced one of their classmates.

Eventually her friends are able to extract her from this predicament and rekindle her confidence (and feed her). Right in time for the appearance of a new villain. After being confronted by the Precure he does what villains do and calls up the monster of the week for them to fight. Eager to impress and redeem her earlier mistakes, Parfait charges in alone.

Once again the other Cures have to bail her out, before knocking it down so she can land the finisher. Because she may not be able to carry the team on her own, but she doesn’t need to be, she’s still an important part of it and her friends are there to support her even if she can’t do everything alone.

By having her first major episode after becoming a Cure be a disaster for her, the show breaks with the expectations that come with a new team member and manages to gracefully integrate her into the group while still letting her stay important. 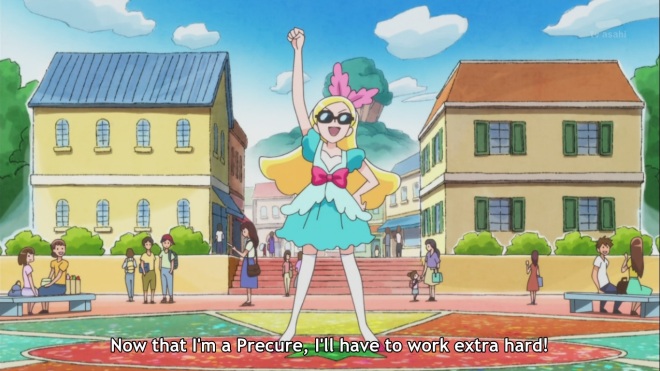