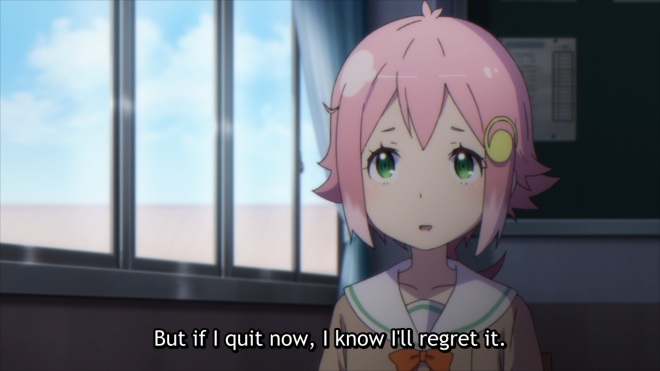 This episode was definitely another excuse for some breathing room, taking time to establish a few of the characters outside the main pair a little more. Last week told us why Mangetsu wants to fight, this time we found out why everyone else is getting in on this.

The main focus of the episode was establishing the conflict between Shingetsu and Anna more firmly, and finally telling us why the latter is so determined to destroy the other. Honestly the extent of her hostility feels somewhat hard to square with the percieved  severity of Shingetsu’s crimes, at least as presented. Shingetsu was due to be addopted into Anna’s family as a way of preserving the two magical bloodlines, which Anna percieved as a hostile attempt at taking over her family, we’re also introduced to Anna’s mother and younger sister, who seem extremely fond of Shingetsu and are hurt by her attempts to distance herself. On the surface this does sort of make Anna seem a bit petty but we also know full well that Shingetsu can interfere with people’s perceptions so it’s not entirely impossible that there’s more than meets the eye going on here with regards to the rest of the family.

Interestingly the other fighters also seem to be motivated by family, this episode features Kuon summoning her own Armanox for the first time, seemingly acting as a standin for her older sister, who’s incapacitated by a curse. Nene on the other hand isn’t directly given motivation within the episode but the way the camera keeps cutting back to a photo of her family, as well as the episode preview definitely imply she’s fighting for her own sisters as well. Suisho remains an enigma but that’s definitely in keeping with her character archetype really. The dynamic this sets up is actually kind of interesting, where all the other fighters are in this battle for the sake of other people, only Shingetsu and Mangetsu are doing this for their own sakes.

Shingetsu’s goal is to use the power of the Princeps to erase that very power, undoing the existence of magic forever. While the exact reasoning is left vague it’s clear that she considers the burdens of being a magus descendant and having to compete in the Granbelm to be something she wants to be free from. While Mangetsu accepts this explanation gladly it does subtly put the pair at odds again. Shingetsu is actively fighting to destroy the one thing that makes Mangetsu special, while they’re still allies for now this is definitely going to have to be confronted eventually.

Establishing motivations aside this episode brought the contest itself back into the frame, skipping ahead rather abruptly (there was no real sense of time passing within the episode so it felt a little off when it was just instantly a month later) to the next full moon and the night of the Granbelm. Once again the show has a lot of visual flair going on, and the battlefield being a reflection of an individual fighter’s soul means they get to mix things up a little after the previous ruined town. Kuon’s blasted wasteland is a fairly obvious setting to draw from her character but it’s still pretty in its own way. I do wonder who the first episode’s ruined city came from, Anna and Rosa seem like the obvious candidates but it’s hard to tell really.

Next week seems to be centered around Nene, so we’ll probably get a bit more clarification on what her deal actually is.