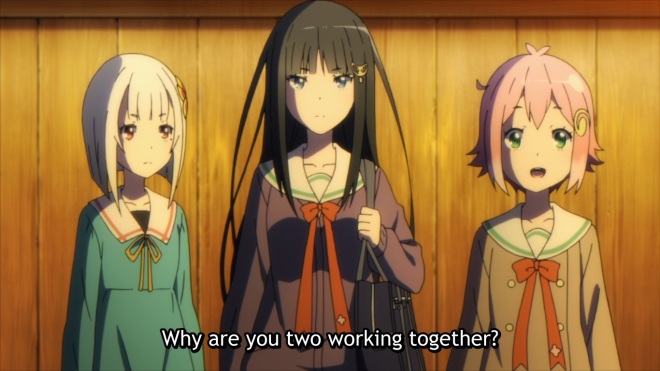 As expected this week’s episode was fairly Nene centric, although not necessarily in the way I’d expected. Rather than having her act as the central figure of the episode she was instead the central obstacle for the other competitors to deal with as she finally came out of hiding and revealed her Armanox’s special ability.

Given how flashy that ability turned out to be it’s no wonder she chose to hide for the last year, the sheer power on display was always going to mark her as a priority target for the other competitors (this episode also confirmed the existence of other, previously defeated fighters from before Mangetsu joined in so that was neat I guess). And that’s exactly what happens. Much of the episode was spent with other characters trying to form a coherent counter to Nene’s attack, both on and off of the battlefield, as her presence essentially pins down everyone else completely. In a way her choice to reveal herself now might have backfired ultimately, as she’s established herself as the big threat to the status quo, the others have to take her down or the competition becomes untenable for all of them.

Having failed to defeat her in a straight fight, a surprisingly proactive Kuon manages to track down Mangetsu and Shingetsu to propose a temporary truce. While she’s pretty upfront about not actually wanting to team up long term she’s smart enough to recognise that this threat has to be dealt with if any of them want to win. She also questions Mangetsu and Shingetsu’s alliance, reafirming that the nature of the contest means they’re eventually going to be at odds. Mangetsu breaks the tension though by just saying they’ll cross that bridge when they come to it. It does serve to highlight once again the inherently strained the duo’s relationship is, as much as they both might want it to be otherwise. 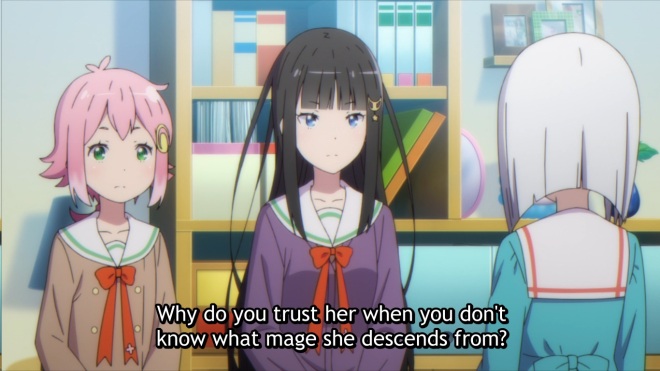 Once again the series seems inordinately concerned with lineage.  The fact that Shingetsu has no idea who Mangetsu is descended from is possibly the thing that surprises Kuon the most about their arrangement. While it makes sense on a practical sense, knowing which famous mages are in a rival’s family tree might give some insight into their powers, Mangetsu’s questionable lineage sort of feels like the point. As well as furthering her status as an outsider not raised for the Granbelm, it puts her in a position to take part without all of those trappings, which is probably what Shingetsu sees in her.

While not as central as expected Nene herself still got a fair amount of the episode, mostly fully establishing the backstory hinted at last week. The big surprise was her decision to reveal herself as a mage to Shingetsu and Mangetsu, motivated seemingly more by her own inner turmoil about the isolation her status and game plan have forced on her than the carefully cultivated strategy her sisters have been coaching her through. Or perhaps she’s just aware after eavesdropping on them that the others are gunning for her and is trying to shake things up. How well this actually plays out her remains to be seen of course.

Whether this week’s alliance holds up in light of Nene’s intervention it still helps to establish Kuon as a serious competitor who’s willing to adapt in order to win. Unline Nene herself who’s previously struggled to act decisively, a trait which seems like it’s ultimately going to come back to bite her next episode.

2 thoughts on “Granbelm Episode 4: Teaming up”