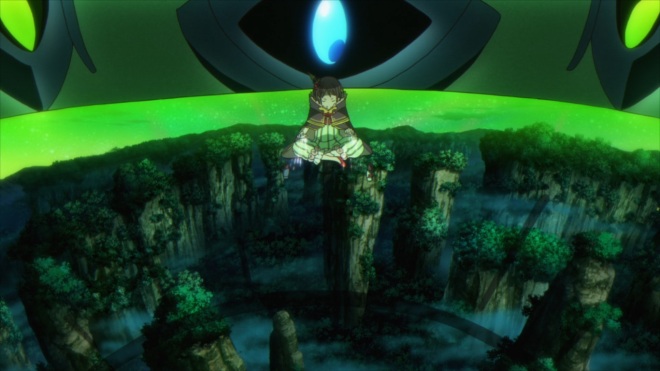 This episode was one long drawn out battle and it was spectacular. The show’s always looked good but they definitely went all out this episode. Beamspam happened, big fancy magic sigils were cast, it was generally a good week for cool robots.

The setting for this round was another fairly obvious visual reflection, Nene’s own magically inhibited growth producing a battlefield filled with towering mountains. As a bonus it allowed for a lot of interesting tactical plays from all three sides of the fight. While giving her plenty of room to hide, in a way which may or may not have been planned given the level of strategic micromanaging her sisters have been doing for her, the arena also gave the other teams plenty of space to do their own hiding. As is so often the case nobody’s strategy really panned out as intended of course. Mangetsu and Shingetsu’s alliance with Kuon fell apart fairly rapidly as the latter was drawn off by Suiosho, Anna’s plan to use this to ambush Shingetsu ended in yet another failure and Nene’s conflicted feelings led her to sabotage her own strategy.

Things eventually came down to a 1v1 showdown between Mangetsu and Nene, who passed up on an oportunity to win before it started because she couldn’t bring herself to keep fighting via deception. This resolve to fight face to face felt like a logical continuation of her actions last week. She could keep fighting with methods she found unsatisfying in order to give herself the best chance at winning, or fight on her own terms. Ji Guan Long’s transformation in line with her new resolve to fight head on reflected this well, a new form for a newfound resolve, if the Aramanox are reflections of the user’s souls then it stands to reason they’re not static things. 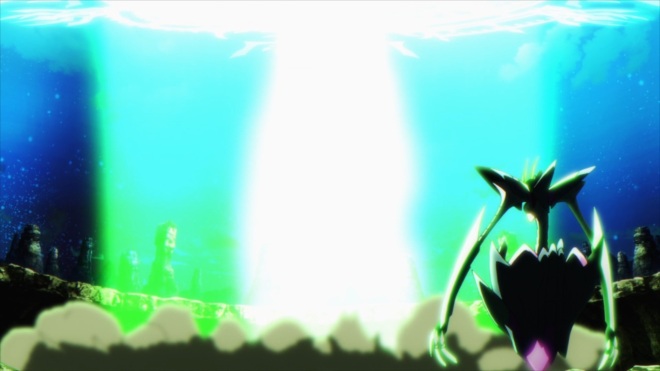 Sadly for Nene no amount of personal growth can stand up to the might of protagonist shenanigans, and her ultimate attack failed in the face of a sudden surge of seemingly malignant power from Mangetsu. Probably the most interesting part of it was the apparent flashes of Nene’s memories which ended Mangetsu’s berserker rage. The whole sequence was slightly hard to follow so what any of it actually means is still sort of up in the air but it’s pretty obvious there’s more going on with Mangetsu than the show has been letting on before now.

We got a little more from Suisho this week as well in her encounter with Kuon. The reveal that she was responsible for cursing Kuon’s sister doesn’t feel entirely out of left field since her character thus far has mostly displayed an affinity for reveling in the misery of others but it does establish another link between her and a member of the cast. She’s clearly got some sort of influence over Anna despite ostensibly being her servant, I can’t help but feel like they’re setting her up as some kind of puppetmaster villain. Given the show doesn’t really have any specific antagonist at this point she’s at least the most obvious choice. At the same time I’m kind of hoping they don’t go down this route and instead end up challenging the system itself.

Nene may have been knocked out of the running but she’s still around in the real world based on the preview. It’s nice that she’s not being dropped as unceremoniously as Rosa was (baring some kind of surprise return from her of course) and it seems like she’ll end up being an ally to Mangetsu despite having been knocked out by her. The rules of the contest preclude any form of long term alliance on the battlefield but there’s nothing stopping them teaming up in the outside world.