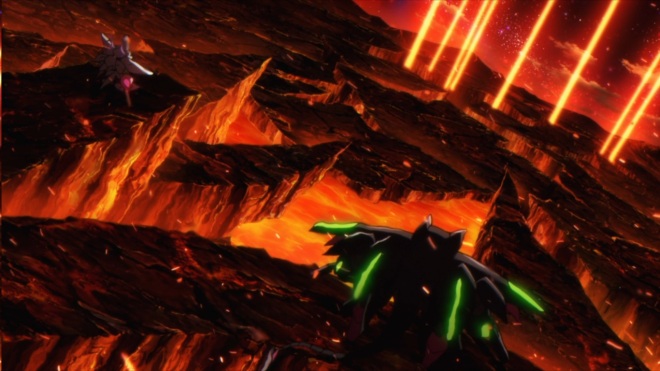 The inevitable showdown between Anna and Shingetsu finally became unavoidable this week, and the show didn’t pull any punches. While not a single long battle like Nene’s the majority of the episode was once again devoted to a single climactic fight. As always the show’s visuals were firing on all cylinders too, pushing things to even higher levels of visual spectacle. Before that though we got some more set up, establishing Nene’s new supporting role via a communicator allowing her to keep tabs on Mangetsu even inside the other world and provide some comentary. This ultimately didn’t do much though as once the fighting started Mangetsu sidelined herself in order to keep Suisho tied up and allow Shingetsu to settle things with her adoptive sister on her own. We also got confirmation that Anna’s mother did in fact survive the end of the last episode, another instance of the show side stepping the obvious edgy tropes in favour of something potentially more interesting. Anna’s mother still being alive means the two of them are going to have to come to terms with how things have panned out. Anna herself is obviously to blame for a lot of what’s happened but her mother’s failure to see just how far she was pushing her daughter down this path certainly didn’t help.

Anna continued to burn her few remaining bridges however, in one of the episode’s most powerful scenes her younger sister Claire made one  last attempt to disuade her from fighting, which predictably went nowhere. Despite everyone reaching out to her Anna’s singular obsession won through yet again. 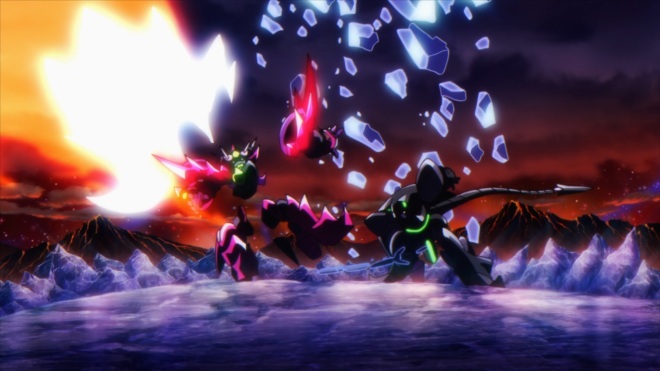 And then we got to the actual fighting. Unsurprisingly the stage for this round was a molten wasteland forged from Anna’s rage, an apocalyptic backdrop for one of the show’s most explosive battles yet. Anna’s overpowering new magic stone allowed her to pull off some extremely flashy spells, flaming scythes the size of mountains probably aren’t actually that practical but they sure look cool. She also revealed a surprise affinity for ice magic, her firey rage coalescing into a more cold, focussed hatred for Shingetsu. As with Ji Guan Long’s transformation in episode 5 the show used the physical state of Aconite Gris to reflect Anna’s own determination, as she replaced more and more of her crumbling mech with fire and frost as the fight progressed, a visual representation of her all consuming hatred allowing her to keep fighting even as her body was overwhelmed by raw magical power and torn apart by Shingetu’s counter attacks. 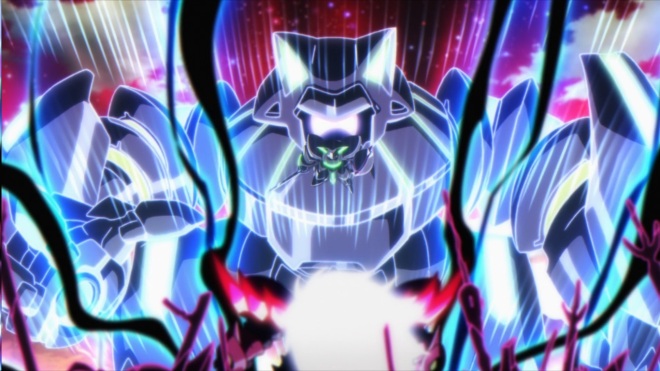 Shingetsu meanwhile had to pull out all the stops just to fend off her enraged opponent, at one point summoning a colossal (but still cute and SD of course) secondary robot purely as a diversion, she was very firmly on the back foot for much of the encounter. Ultimately she was revealed to be once again holding back, in spite of her stated determination to settle things on her own she couldn’t bring herself to actually defeat Anna, she’d previously gone to great lengths to avoid a direct confrontation in the hopes that someone else would do the job for her. After all this time running away from this confrontation Shingetsu ultimately couldn’t commit herself fully to destroying someone she cared about. In the end though she was left with no choice, with Anna on the verge of possibly killing her for real she revealed that she was in a position to win all along, catching Anna off guard in her moment of triumph and finally bringing her rampage to an end. Anna may have been defeated here but as she said herself, her only goal was to hurt Shingetsu, and she certainly achieved that.