Well this is late but what the hey. My excuse is that a lot happened in this episode and I needed time to mull it over (it’s acutally just procrastination but shh). Being this late means I’ve already seen episode 11 at the time of writing but I think most of my takeaways from this one haven’t changed too drasticly so let’s do this anyway. 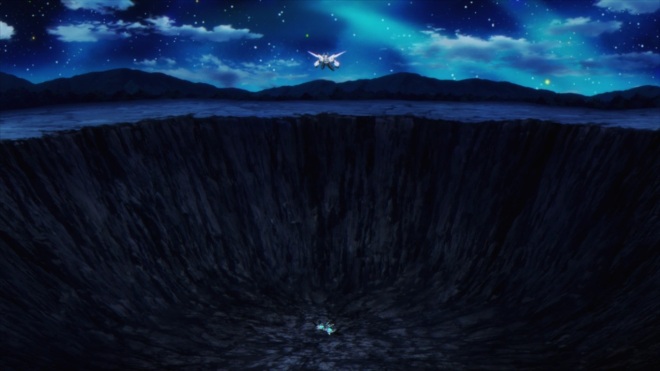 A few taunts aside, the big reveal of Mangetsu’s nature at the end of the previous episode was somewhat brushed aside in favour of continuing Kuon’s battle with Suisho. A battle which surprisingly concluded with Kuon winning again. Briefly. Once again demonstrating some high level shenanigans Suisho managed to shrug off being stabbed through the heart by Kuon in order to turn the tables. Suisho’s ability to just shrug off defeat is getting a bit much honestly, while obviously the series needs to keep her around and have her be a credible threat for the final showdown it still feels a bit weak to have her just ignore fatal blows as necessary. Ultimately though Kuon not only lost but was killed in the process, and accordingly erased from the real world. She wasn’t the only one. 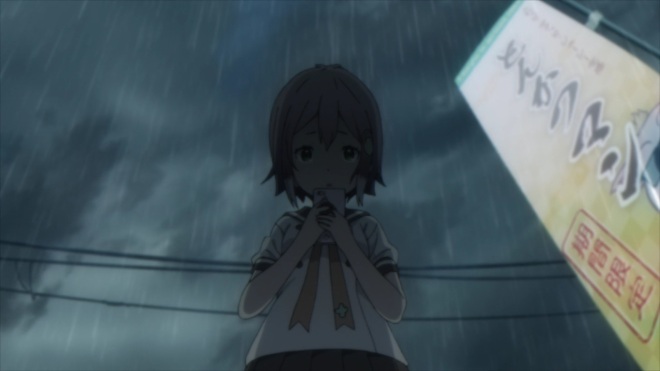 In the aftermath, struggling with her own uncertain existence Mangetsu discovers that her own family no longer remember her, and other people barely even acknowledge her presence. As she becomes less and less tied to her own humanity her existence becomes less solid. While Nene and her sisters are able to help slow the process a little it’s clear that Mangetsu is eventually going to fade away, becoming the nothing she feared so much. 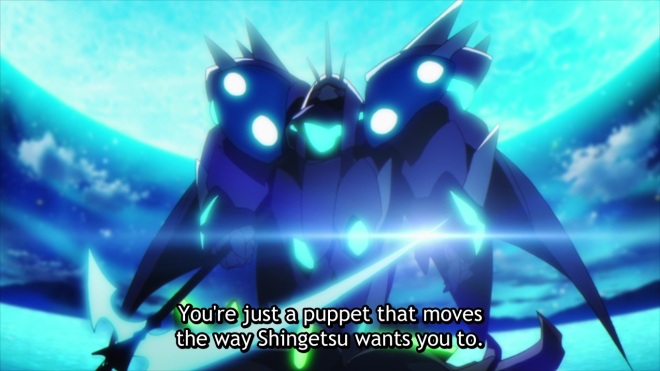 The start of the episode also revealed that the one responsible for creating Mangetsu was in fact Shingetsu, her wish for a companion to support her through the competition and be a friend not pushed away by her nature as a mage candidate. The Magiaconatus answered this wish becaues it seemingly has already determined that Shingetsu is the candidate most suited to winning Granbelm. Suisho’s contention that Mangetsu is just acting as Shingetsu desires is fundementally incorrect though. We’ve seen enough of Mangetsu’s perspective to know that she does have her own agency, just because she’s artificial doesn’t mean she doesn’t have her own feelings and desires. She’s also repeatedly gone against Shingetsu’s attempts to protect her by having her drop out. Mangetsu exists for herself just as much as she does for Shingetsu.

Shingetsu on the other hand might be even less in control of her own destiny. If Suisho is correct and her victory was predetermined by Magiaconatus then how much of her life has been put in place for her behind the scenes? Assuming Suisho is being truthful at this point all of this was a test she was designed to succeed at. Which means everything that happened with Anna was unavoidable, if Magiaconatus is playing with people’s lives on this scale then nobody involved really has any free will to begin with.

This still leaves a lot of questions as to where Suisho fits into all this. She seems to be entirely aware of how this has all been set up, and what Magiaconatus wants. One possibility is that she herself is an artificial being, created specificly to be a final test for Shingetsu, it would explain some of her shenanigans and her focus on psychological attacks, she’s testing Shingetsu’s resolve to see if she’s capable of controling all the world’s magic. Alternatively she could be a previous winner, the implication from her rooftop conversation with Shingetsu is that merely being the last woman standing isn’t enough to become the Princeps, it merely entitles one to attempt to, it could be that Suisho defeated her opponents in some previous incarnation of the contest only to fall short and be pressed into service as a final obstacle and judge. It would certainly give some motivation to her malice towards Shingetsu, as someone who’s seemingly been marked as a worthy victor already.