Somewhat obviously for an episode putting Suisho at the center of things there was a lot of deception at work this episode. These lies were also coupled with a lot of reveals though, as Kuon and Nene managed to push what’s really going on further into the light.

The stage for this week’s battle was Suisho’s of course, initially appearing as an unending realm of fog, as always the visual symbolism this show attaches to each location isn’t exactly subtle but it’s hard to argue that it doesn’t fit her duplicitous nature. While Mangetsu and Shingetsu were initially adrift in Suisho’s fog it fell to Kuon to bring some clarity to things, blasting away the veil and revealing the true nature of Suisho’s inner world. Freed from the obvious obfuscation this one is a lot more interesting actually.

The giant castle looming over the darkened woods reflects Suisho’s role in the show pretty heavily. While she’s intentionally stayed on the sidelines she’s always been the one driving the show’s conflicts; spurring Anna on to ever higher levels of self destructive hatred and playing games with Kuon’s inner turmoil. Suisho might have chosen to stay out of the spotlight but she’s always been an overpowering presence, an inaccessable entity who seemed to know more than anyone else about what was going on, where everyone else was simply doing their best to meet their own goals, Suisho has had some greater plan at play behind her unflinching facade. 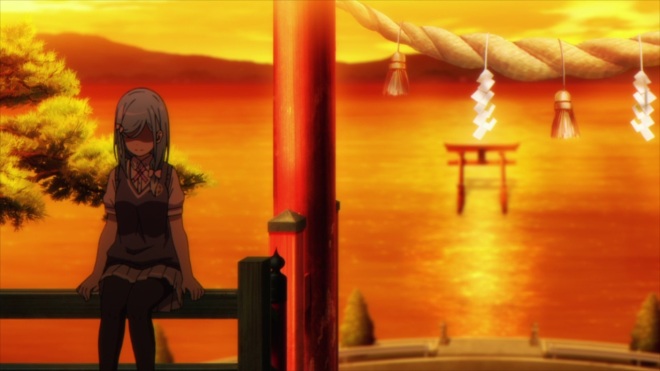 Kuon meanwhile continued to struggle with her own feelings about her sister’s curse and Suisho’s involvement. The contradiction between her memories of a sister who would go to any lengths to protect her and Suisho’s insistence that Shisui willingly allowed herself to be cursed by someone who clearly saw her as nothing but a plaything continues to eat away at Kuon in a way that threatens to overwhelm her. It’s only the last minute realisation that these two things aren’t in fact mutually exclusive that saves her. Shisui did willingly allow herself to be seduced by Suisho, but only as a way to continue protecting her sister. While it’s still not clear why she considered Suisho enough of a threat to merit sacrificing herself it paid off in the end, giving Kuon an unexpected opening and allowing her to gain the upper hand. 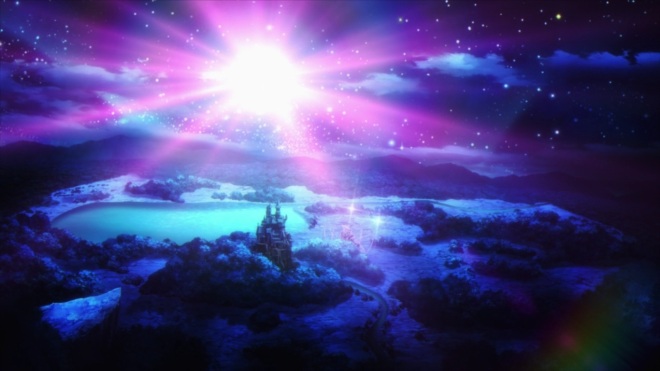 However, Suisho obviously isn’t the type to go down so easily, emerging from the flames of Kuon’s finishing blow in a transformed and seemingly unharmed Drosella Nocturne. Having shed the cloak and trappings of the trickster her Armanox has become more suited to direct confrontation as she finally begins to get serious. This newfound directness is pretty quickly established as she overpowers the drained Kuon in moments. Her real goal however seems to have been luring out Mangetsu, who had previously been kept out of the fight by Shingetsu after an off screen revalation from Nene. Unable to stand by and watch Kuon be defeated, Mangetsu charges into fray while Shingetsu’s attempts to stop her are held back by Suisho’s summoned Spirit Medusa. 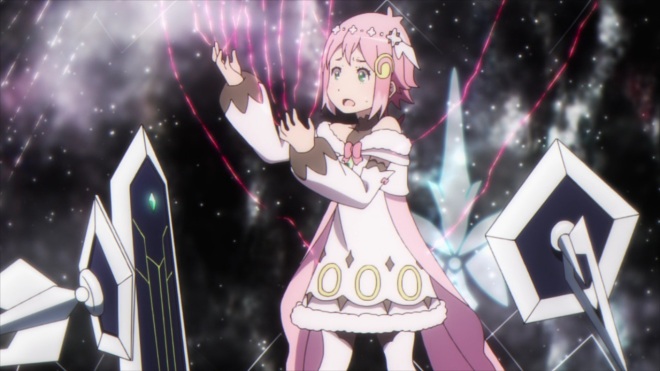 Which brings us to the episode’s biggest reveal. Mangetsu is nothing. The series continual return to that well finally came to a head this episode as a swift strike from Suisho seemingly defeated White Lily in a single blow. And then we got the truth. Mangetsu’s pervasive feelings of emptiness were correct, because she’s not a human. Mangetsu is some sort of artificial being, controlled by someone or something else. We’ve seen her strings but we still don’t know exactly who or what is pulling them. Or to what ends. My money’s still on some facet of Granbelm itself given the lingering shot of the moon when White Lily got stabbed and the apparent appearance of Magiaconatus in the real world towards the end of the next episode preview. On the other hand, given how she seemed aware of Mangetsu’s nature even without Nene’s research Suisho’s a possibility, using Mangetsu as a surprise trump card to even the playing field.

We might have gotten some major reveals this week but if anything they just raise more questions. Questions next episode looks to be digging into in a major way.