So last year I ended up replaying the entire Ys series on Nightmare on a whim, it’s one of my favourite game series and playing them all so close together gave an interesting perspective on a bunch of games I’d previously played spread out over several years. Mechanically the games are pretty drastically different (although they do fall roughly into three broad gameplay eras) as the series has evolved over the past 30 years but there are a few constants, with the exception of one distant prequel to the original games we’ve had one persistent world since the beginning, and our window into that world has always been the adventures of one man, Adol Christin.

Adol is a pure heroic archetype, driven solely by a desire to travel the world under his own power and a need to help anyone and everyone he meets when they need it. He shows up when there’s trouble brewing, saves the day, gets the girl and then leaves for the next big adventure, repeat as necessary.  As a vehicle to explore a world that’s fine, you have a protagonist who has no real ties to any one place, he can go wherever the story needs him to be and you can have a completely different location in the next game without much setup because hey, that’s what Adol does. On its own though, it’s a pretty empty archetype, it tells you what Adol does but not who he is.

The series has taken a bunch of stabs at examining this, as a silent protagonist most of the work naturally has to be done through his actions, and over the course of 8 mainline games there’s definitely sense of him as a character beyond just the archetype, he hits all those notes but he does genuinely want to be helpful for its own sake rather than for fame or glory, to the point where he often comes across to the people around him as a bit of a busybody, a lot of situations Adol finds himself in aren’t because anyone asked him to, he just stumbles in at the wrong time, or gets a little too curious and ends up swept along in another ancient plot finally coming to fruition. The point is often that it doesn’t have to be Adol, he may sometimes play the role of the foretold hero but it’s never about him specifically, he gets to play the hero because he’s a genuinely good person who wants to help, he’d do it anyway even if he were told not to.

Anyway we’re almost 500 words into this post which is very definitely about anime and I’ve yet to talk about anime so lets move on to the OVAs. As part of my replaying the series I’d planned to at some point watch the two late 80s/early 90s OVAs that were released adapting the first two games. For various reasons I just never got around to it but I’m glad I finally corrected that because they’re genuinely interesting in how they present this this character  in contrast with the series as a whole (worth noting is that when these started coming out there were only 3 games in the series so a lot of the character work from later games hadn’t happened and the conceit of Adol having adventures not directly tied to Ys itself hadn’t really solidified yet). 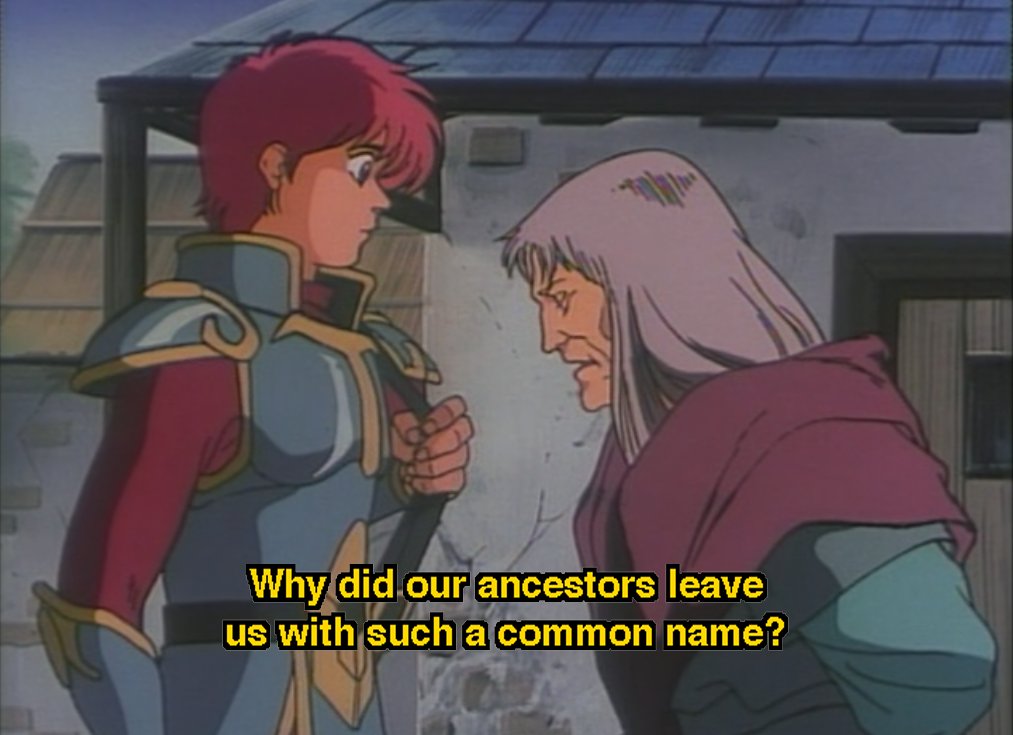 Adol in the late 80s OVAs is the destined hero. Very specifically so, where in the games Sara foretells that a hero will arrive to save Esteria, this version of the story has a widely known prophecy that literally cites Adol Christin by name, to the point where Jebba imediately dismisses him as a poser trying to exploit the legend for his own gain. This legendary status is mostly played fairly straight within the OVA itself, Adol proves himself to Jebba and slowly gathers the books of Ys, it’s a fairly straight adaptation for the most part. The prophecy angle is interesting mostly in that while it was an entirely reasonable extrapolation from the plot at the time the OVA was released it runs pretty counter to how Adol is treated in the wider series. As I said earlier, it never has to be Adol, and yet here in his very first adventure it absolutely does. It also sets up for the more interesting examination that is the Ys II OVA.

Released a year after the first set of OVAs finished, the Ys II anime strikes a dramaticly different tone, where the first game recieved a fairly faithful adaptation for the most part this one veers off into some distinct directions, focusing a lot more on the state of Ys having essentially been under demonic rule for the past 700 years. In keeping with this darker outlook Adol himself seems to have lost some of his innocent do goodery with the art style shift. Where down in Esteria he was eventually welcomed as a long awaited saviour, in Ys itself he’s seen as a destructive interloper and a threat to the fragile balance the surviving humans find themselves in. When he kills off one of the upper caste demons to save local girl Lilia from being sacrificed the villagers react not with gratitude but by imprisoning him in the hopes of lessening the inevitable retaliation. After escaping and making his way across the island thanks to a handful of sympathetic villagers Adol arrives at the Solomon Shrine, center of demonic power on the island and home to their overlord Darm. Determined to finally bring an end to the curse plaguing the land, as he’s destined to do.

He fails. After fighting his way through the shrine Adol falls short at a crucial moment and all the human captives within are turned to stone en masse by Darm’s second in command Dalles. Enraged by his failure Adol goes on a rampage, slaughtering his way to the core of the citadel to confront Darm not out of any heroic desire to save people, but anger at his own abject failure. He fails again. 90s Adol does not defeat Darm. Instead it’s the intervention of Lilia, who through some slightly convoluted shenanigans made up for this adaptation is able to subvert Darm’s final ritual at the last moment so that Adol can slay him. Adol may have been the one to land the final blow but he was powerless only moments before, having fully sucumbed to his darker instincts in the face of Darm’s overwhelming power and his own torment. Adol couldn’t get the job done.

Adol as a character is often at his most interesting when he fails, if he exists as a sort of idealised hero then how he deals with failure can say more about him than when he wins for the dozenth time. One of the high points of the entire series is Ys II’s Campanile of Lane sequence, which the OVA altered somewhat to use for the catalyst for Adol’s rampage. The game’s version puts Adol in a hopeless situation from the start, he has to rescue Maria, one of the captives and fiance to one of his allies from the belltower, to do this he has to reach the top of the tower before the bell tolls five times. It’s impossible. Maria herself says as much from the beginning, begging Adol to give up on her and save himself. But you still have to try, because Adol is a hero, he can’t just abandon someone in need. So you dash through the tower (the music for this section is fantastic incidentally) racing against the bells, and you fail, Adol will never reach the top in time and he knew this from the beginning. Maria dies, Dalles appears to taunt Adol for his failure and you have to descend the tower again in complete silence. You exit the tower to return to the shrine proper, unsure what’s happening next. Then Battle Ground kicks in for the first time, everything becomes clear again. Adol has failed but it’s not over. Where the Adol of the adaptation gave in to his despair and lost his way, Adol in the games choses instead to push on and end this, because this can’t happen again, Adol failed and an innocent women died for it, but he won’t let the tragedy repeat any longer. This whole section of the game lasts less than five minutes, Adol never says a word and yet it says so much about his character. It never has to be Adol but that doesn’t mean he isn’t going to save everyone he can, because that’s what he does.

The old OVAs might be a bit janky at times but I genuinely enjoyed watching through both of them. The Adol presented in these adaptations might be drastically different from what he’s become over the years as the games diverged from and expanded on who he was in the original duology but they’re still an interesting insight into who he is. OVA Adol is one who probably never had another adventure, his journey ended with Ys because that was what his story was, the destined saviour of Ys, drawn by an uncontrolable compulsion to journey to that one island and fulfill that destiny. His failure ultimately serving to prove that his role in the world died with Darm. Meanwhile the Adol the games have followed ever since is one who got to grow beyond the limits of his original story, a man who would later turn down the offer of the world’s knowledge from a god, just so he could go out and see it all for himself shouldn’t be shackled to the tale of one island. Adol Christin doesn’t need destiny to tell him to save the day, he’ll do it because it’s the right thing to do, and that’s what makes him truly heroic.

Today’s post was about how adaptations can do interesting things by diverging from the source. Lets continue on that theme tomorrow shall we? Until then I’ll leave you with this screenshot of 80s Adol holding a big fish. Because it’s v moe.