Way back in the long forgotten era that was the 12 days of anime 2017 I wrote a piece on how Granblue Fantasy’s anime adaptation was at its strongest when using the downtime freed up by cutting a lot of the padding in the game’s story to explore areas of the setting the game doesn’t touch on so much. Outside of those few moments and some other changes to facilitate a more climactic finale the first season was a mostly fairly straight adaptation of the early story, It definitely had its moments but perhaps it was a little unambitious. Fast forward two years and the anime’s second season seems willing to deviate a lot more and it’s all the better for it. While still broadly faithful to the main storyline they’ve been taking a lot more liberties with switching things around and incorporating material from later in the game or individual character stories. The biggest changes so far have been to Ferry’s arc, which has been pretty heavily restructured while keeping most of the core plot points intact, and on the whole it’s an improvement. The original Mist-Shrouded Isle storyline was… messy. Even putting aside the extremely poor quality of the original english localisation for that section of the game (which has thankfully been rewritten since then) the story was sort of half baked and didn’t quite flesh out its characters and events (as presented we sort of killed everyone on the island without warning, oops).  It definitely wasn’t bad and it’s generally in the vague area where most people consider the story to start getting good but it wasn’t quite great. It’s clear they hadn’t quite decided where, if anywhere the characters involved were going to go in the future. The anime on the other hand, has the benefit of years of aditional character and story progression to work from, and it uses them well for the most part.

Perhaps the biggest change is that it subverts the bait and switch from the game’s storyline. In the original much of the early part of the arc is spent following the trail of a suspicious doctor who just happened to arrive on the island around the time things started to go south, making him an obvious culprit in the summoning of Celeste. It then turns out that while he did try to call the Primal Best he succumbed to the plague before succeeding, setting up the eventual reveal that it was Ferry’s desire to avoid losing anyone else that drew Celeste to the island and maintained everyone in a state of undeath. Here however, he actually did succeed, or so it appears at first, with the doctor having shenanigansed his way into a sort of parasitic state within the Primal’s body in order to grant himself eternal life. On the face of it this sort of reduces Ferry’s significance within the story, as it undermines Ferry’s role a little, she’s now just a bystander in someone else’s scheme rather than the unknowing architect of the situation. However this also turns out to be a misdirect, while the doctor is still around to serve as the arc antagonist it’s revealed that Ferry was still the one who called the ghost ship, undermining the doctor’s plan and stopping him from fully merging with the Primal as long as its summoner remained.

Ferry also has her wider role on the island shifted a little, where originally she was reclusive but at least known to the other islanders, here she’s invisible, hidden from sight by Celeste’s powers and wandering the island as a solitary ghost while trying to figure out a method of undoing the island’s curse. It’s a small detail but it gives her a little more of a direct stake in things where the game just sort of glossed over what she was doing hanging around in the mansion. 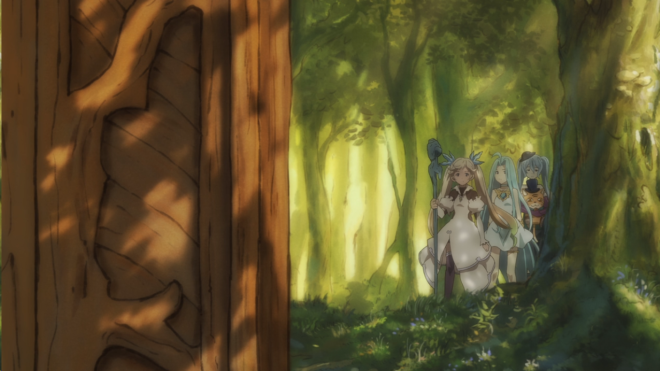 Another major addition is a large chunk of anime original content in episode 20, with Lyria, Io and Orchis having been swallowed by Celeste the trio go on a journey through a strange dimension created from Io’s memories as they’re consumed by the Primal. In part this serves to fill a gap left by the first season’s changes, as much of Lumacie was cut and with it a lot of Orchis’s early screen time, so this provided an oportunity to flesh her out a little. It also provided some extra characterisation for Io, arguably the least relevant member of the crew this season (Io’s general lack of ties to the ongoing plot is sort of the crux of her character arc and it’s good actually but that’s a topic for another time really). It’s a welcome extra slice of character focused content in an arc which was originally only really concerned with Ferry and Drang. 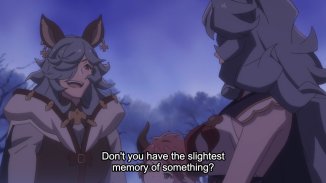 Speaking of Drang, master of subtlety that he is, a lot of the changes to this arc borrowed heavily from his later fate episodes an clarifying his ties to the island. While the game at least acknowledges that Ferry is his long lost great aunt (although due to the original translation being really bad at correctly identifying speakers it actually implied that he was her aunt, which would have been an interesting twist I suppose) it doesn’t realy go into a lot of depth on their family situation, which leaves Ferry’s arc sort of hanging once Celeste is dealt with and her playable version’s early storylines sidestep the topic entirely. It wasn’t till Drang was made playable a few years later, and a new version of Ferry several years later again that they picked up that particular plot thread again. But since all that later development has happened the anime is able to incorporate it in a way that allows the pair to find some closure within the arc itself rather than just leaving things hanging for years.

Overall the anime’s handling of this arc was, in my opinion at least, a big step up from its previously fairly unambitious take on the game’s story. By incorporating elements from later in the game’s life they were able to expand on the island’s storyline and create a version of the story that I honestly prefer to the original. Sometimes overly faithful adaptations can stifle their own potential to expand on the source material, so it’s nice to see a show making fuller use of the resources and leeway it has access to.

Granblue’s something that’s been a big part of my life for the last few years, tomorrow we’ll be talking about something which is smaller but has been just as consistent.

One thought on “12 Days 2019, Day 5: Granblue Fantasy and Deviation in Adaptations”