So this year I hit a bit of a milestone; 500 finished anime. While ultimately pretty arbitrary and not indicative of anything much it’s still a big number, so I decided the 500th entry should be something momentous and well regarded. Gotta hit those big milestones with big series, right? Just kidding, I watched Sega Hard Girls.

If there’s one very specific subset of anime that seems to exist to appeal to me specificly it’s janky CG shorts literally animated in MikuMikuDance. So what could be more on brand to hit a milestone like that with? It was  great choice, it’s a cute little series which affectionately pokes fun at old Sega games, the cast are a lot of fun and it’s consistently funny. It also broke me a little.

While the high school setup is mostly a framing device to allow the cast to jump into various Sega games old and new, one which could on the surface have been just about anything else, it’s also a deliberate choice. High school is one of those default anime settings because it comes with a very specific set of expectations. One of those expectations is that it will end. School is finite, someday you have to graduate.

SeHa Girls treats Graduation as a sort of mystical end goal, it’s always there in the background, with a chart tracking the medals the consoles earn in various games, medals which will eventually reach 100 and make them eligable to graduate, whatever that means.  It’s an omnipresent reminder that eventually this has to end, in some way or other this happy moment is temporary, after that there’s only the future, the unknown future.

By the 12th episode, two of the three girls have reached the 100 medal target; Mega Drive has 102, Dreamcast has 101 and, due to an even split between undermining herself through her own overconfidence and the games being seemingly rigged against her, Saturn has 97. The solution is obvious, Mega Drive and Dreamcast just have to share their medals with their friend. But Dreamcast refuses. Because graduating is scary. By reaching their goal their time at Sehagaga accademy will come to an end, and they’ll go their seperate ways. She’s won over by promises that they’ll keep in touch after graduation but it’s still the moment where it hits home. This is the end, even if they can stay in contact after the fact they’re still going to be split up, the people who’ve been a huge part of their everyday lives for the duration are going to vanish, because the thing bringing them together is over. School is a temporary space that acts as a sort of in between for childhood and adulthood, the end of school represents transitioning from that comfortable space, with its defined limits and scope into the real world, one devoid of the omnipresent guidance school offers.

It’s some fairly obvious symbolism really, but what does entering the real world actually mean for a personified games console? As it turns out it means becoming that console. As personifications they embody the entirity of that piece of hardware, and their entry into the world will lead them to literally become all of that hardware. The exact mechanics of this are vague, because it doesn’t really matter, what does matter is that they’ll enter a new state of existence. They’re not just leaving their comfortable school life behind, they’re ceasing to be in their current form. Entering the world as consoles they’re not just being split up geographically but temporally, for all their promises of keeping in touch the practicalities of the real world are going to make that impossible. All they’ll have left is their memories of one another.

But you can’t avoid it forever, so they go. Mega Drive goes first of course, trying to set a good example for her friends by getting it over with quickly, only to undermine her cool exit by having to duck back in to retrieve her book. Saturn falls back on her ego to psych herself up in the face of rising doubts. Dreamcast is left alone. Dreamcast is the one who had the hardest time accepting things coming to an end, who could only keep going on the promise of continued contact with the other two, and now she’s alone. Her friends are gone and aren’t going to come back and she has to go out into the world without them. After being encouraged by Sonic and the other game characters they encountered throughout the series she’s able to pass through the light but the doubt is still there. What if she’s bad hardware, what if she fails?

And because SeHa Girls doesn’t exist in a vacuum, we’re left to deal with the reality that she was right. The Dreamcast was Sega’s last console, Dreamcast failed. For all her good intentions she was the last. It’s a bleak end to an otherwise joyful series, dwelling on the insecurities of the personified individual who brought it all to an end. There’s an emptiness to it all that I’m still not entirely over, I played through an entire Neptunia crossover game just because I needed to see these characters OK again. It wasn’t enough (although it was my favourite entry to date in a franchise which generally produces games I have no strong feelings on). They might have been characters with the same appearances and voices but they weren’t the same people. Dreamcast became hardware and failed, and a lookalike in another canon won’t change that.

But at the end of the day, while it doesn’t shy away from the ultimate fate of the Sega consoles, SeHa Girls is a celebration not a eulogy. As a franchise it was created after the fact, not to dwell on the hardware line’s ultimate end but to celebrate the joy it brought to people. The last we see of Dreamcast isn’t her sales numbers, it’s her as a console being introduced by a parent to his child, as a means of bringing them closer together. Maybe she couldn’t keep going alone in the end, but she still brought joy to people while she was there. Graduation is scary because it marks an end, a step into an unknowable future, one which may well end in failure, but that doesn’t invalidate what happens along the way, making people happy is valuable in and of itself no matter what comes after. There’s a sadness which pervades Sega Hard Girls, a nostalgic reflection on an era long passed, but it’s ultimately a joyful show more concerned with the power of games to bring joy than anything else. 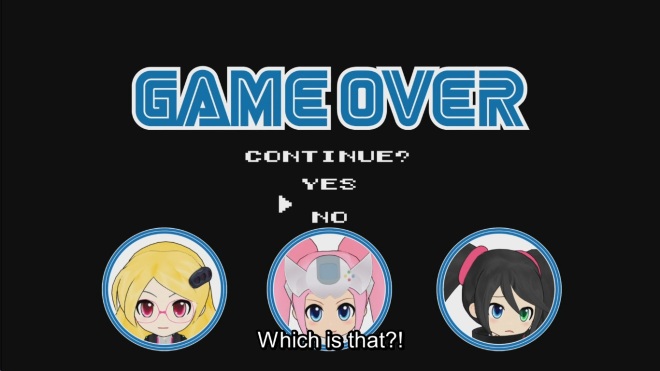 Tomorrow we’ll be living in the moment again, because sometimes you don’t need to justify these things.