Time to talk about one of my favourite shorts ever. Making that kind of declaration about a series literally made in MikuMikuDance about a group of characters standing in the same place failing to make jokes for 11 episodes may seem odd, but it’s true.

Note: It’s more or less impossible to explain just how well made Straight Title Robot Anime actually  is without giving away the punchline, so by necessity I’ll be spoiling the ending here. I’d highly recommend watching the show first, even if it doesn’t look like anything special.

Straight Title Robot Anime is set in a distant future where humanity has been extinct for millenia, leaving behind only robots. Without any humans around to change their orders the military robots have continued to wage war against one another, with no faction ever able to actually gain the upper hand.

As this conflict rages on, a group of three non combat robots; Maid robot Fujii, Librarian Kato and industrial unit Mori begin meeting to try to figure out a way of bringing the war to a close. The series opens with the trio discovering the concept of laughter in Kato’s records. Unable to properly grasp the concept they decide that it may just be enough to end the war, and so begins their quest to obtain laughter.

From there the series becomes an exercise in anti-humour. A group of characters fundamentally incapable of understanding jokes, trying to tell jokes. This inevitably results in comedic concepts being thrown in weird and nonsensical directions. In an episode on one liners the line “I can’t stand when you take out my spine” runs headlong into the fact that the robots don’t actually really know what a human even is, leading them to briefly deduce that one-liners are by nature fatal, before twisting this again and concluding that humans capable of such jokes must have special, indestructible bodies for the purpose.

Each episode follows more or less the same formula, a new comedy concept is introduced, the trio unsuccessfully attempt to apply it in a vacuum, often  inadvertently succeeding, only to have the jokes fall flat anyway because the robots simply can’t parse why these things would be funny. As the series progresses these misconceptions build to form a sort of warped comedic language of their own, one which the participants consistently fail to notice, with the omnipresent narrator lampshading this at every opportunity.

After a short segment in which the trio use a simulation machine to insert various comedy props and scenarios into the show’s opening theme, the second half of each episode is entirely ad libbed, with the cast being given a series of props and a setting and attempting to examine them whilst in character. These are probably the most traditionally funny segments with the three voice actresses trying to one up each others outlandish uses for the various props.

And then comes the punchline. (spoilers start here) 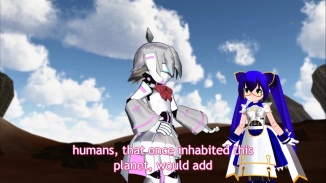 During the final episode the narrator is suddenly revealed to be the science robot Hayabusa, assistant to a human researcher who attempted to develop a laughter program for robots. Seeing their chance to finally stop the war, the trio eagerly accept the laughter program and take it to the simulation machine to see what effect it will have. Only to watch in confusion as the simulated robots shut down en masse.

Hayabusa then explains that whilst humans were able to program the robots with various emotions, a sense of humour was impossible to install. Where things like curiosity and fear would have practical applications in helping robots carry out their duties, humour is inherently reliant on the illogical. Giving robots the concept of laughter would require giving them the ability to ignore their programing, and in doing so deprive them of their reason to exist, with no sense of self-preservation outside of the need to carry out their orders all robots would inevitably cease functioning.

Faced with the choice between allowing the war to continue or wiping out all robots the trio spend some time deliberating before finally entrusting the decision to Fujii. Having been specifically built to serve humans directly they feel she’s the closest to them and therefore most qualified to choose the fate of their successors. 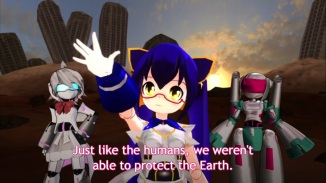 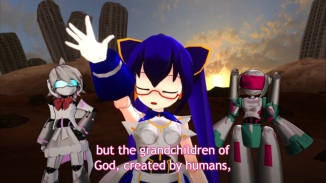 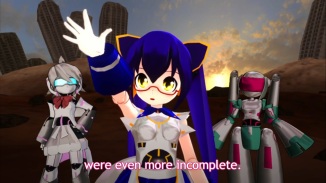 Ultimately she decides to end the cycle of conflict, hoping that if life one day returns to Earth, the next generation might avoid the mistakes the humans and robots made. Mori uploads the program and the robots laugh themselves to death. 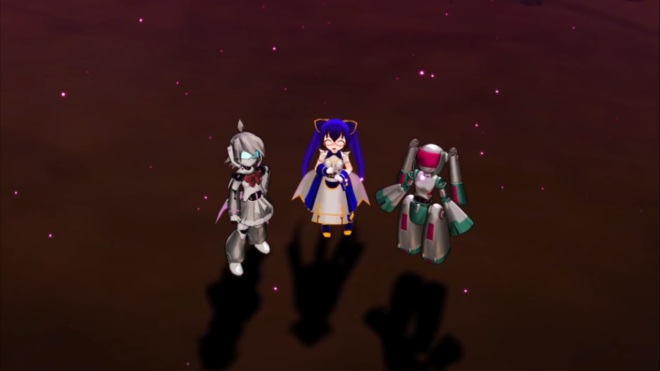 Naturally this is kind of a downer, watching the characters say their goodbyes before they shut down is genuinely kind of heartbreaking. In short, it’s not how you end a comedy series.

Except it is. Straight Title Robot Anime is built around anti-humour, jokes that aren’t really jokes, where the punchline is that the punchline doesn’t make sense. A joke, as the characters understand it, is a profoundly illogical thing that produces laughter by betrayal of expectations. How do you end a series where the jokes aren’t really jokes? With a perfectly constructed joke.

The ending is exactly in line with how Kato described punchlines at the beginning of the final episode, a sudden shift that recontextualises everything that came before it. The narrator wasn’t just some outside observer, he was the key to everything. The main characters get what they wanted all along, but not in the way they expected. Innocent sounding lines scattered throughout the series take on a whole new meaning in light of how things end. And everyone falls down during the punchline.

Straight Title Robot Anime understands its own weird brand of comedy perfectly, and isn’t afraid to go all in on it. It’s ugly and janky and the humour definitely isn’t for everyone, but it’s unique, and I’ll never forget it.

3 thoughts on “Straight Title Robot Anime: Laughing Till The End”