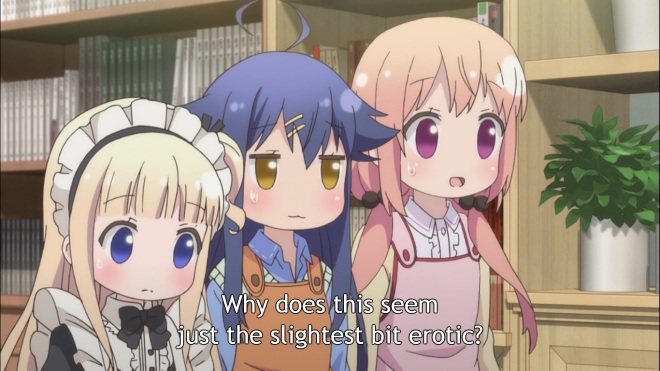 Last season’s Hinako Note is an anime with some major identity issues. It’s an example of a series trying to be too many things at once and, ultimately, not really managing to be any of them. I’m a big fan of moe slice of life style anime, it’s not for everyone, but I love cutesy “schoolgirls doing nothing” shows. Ultimately what makes these kinds of shows sink or swim for me is character investment, given the general lack of any sort of goals or conflict, the characters themselves have to do most of the heavy lifting. To care about these anime you need to care about the characters. Which is difficult to do when said characters are barely defined. Hinako Note stands as an example of how much a lack of definition can hurt these shows.

Interestingly enough Hinako Note’s vagueness was visible before it even aired, with different anime database type sites listing a bunch of seemingly different synopses: Is it about a country girl who works as a scarecrow? Or is it about her turning to theater as a way of overcoming her social anxieties? Or maybe she moves into an apartment in a building full of eccentric characters, including a girl who eats books? As it turns out the answer is d) all of the above. It’s also none of the above.

Hinako Note is at any given point four different shows fighting for screen time with each other.

There are occasional glimpses of a potentially decent anime about Hinako dealing with her anxieties, with most episodes featuring some level of introspection from Hinako as she tries to reconcile her desire to be on stage with her friends with her inability to deal with people.

These moments tend to get buried under fairly standard fluffy Slice of Life fare, the girls go to school,  hang around, chat and get to know each other. Sadly their personalities tend to suffer from the show’s lack of focus as well. Kuu in particular feels like an amalgamation of several different one note character traits, without ever feeling like a complete person. She’s the book eating girl from the synopses, doing so nominally out of a love of books so great that she wants to make them part of her. Except it’s just used as a throwaway gag maybe once per episode, we never see her actually reading anything, despite working in a book shop. And it turns out she actually just likes eating a lot, maybe a quarter of the show’s scenes use “Kuu is hungry again” as a punchline. Also she likes wearing costumes. Because she’s quirky I guess.

The show’s use of theater as a core element is muddled as well. Whilst a lot of the time the cast spend together is nominally theater related, it feels mostly like window dressing. It’s an excuse to have the characters interact, not something integral. You could replace it with extreme ironing and not make much of a difference (I’d definitely watch that show). Even as a way of bringing the cast together it sends mixed messages though, Hinako initially moves to Tokyo in order to join her new school’s prestigious theater club, only to discover that it’s no longer active. As a way of getting around this she and her new friends decide to form their own amateur theater troupe. And then the theater club reforms again a few episodes later and that plot point gets more or less dropped till after the halfway point. Joining the club eventually leads to a stage performance that acts as a sort of early finale, with Hinako overcoming her stage fright to successfully play the lead.

And then the theater club only gets mentioned one more time as an excuse for an impromptu sleepover at the school. With that plot element safely tucked away the troupe is back in action, with the rest of the series being devoted (ish) to the girls preparing for and staging two productions of their own.  The show seems to lose most of what little drive it had at this point, spinning its wheels until it just sort of ends. With the mid-season performance essentially providing a fitting climax the other shows are kinda just there as window dressing, Hinako even regresses to her more anxious self and doesn’t seem to have actually gained anything from her experiences, going through the “I’m too scared to perform, actually maybe I can perform” motions all over again before each performance.

In the first few episodes it’s relatively sparse, mostly relegated to a few Hidamari Sketch-esque scenes of Hinako reflecting in the bath, and some slightly racy endcards. However, as the series progresses the levels of thirst rise exponentially.  Hinako spends the majority of episode 10 in a fanservice-y bunny suit for incredibly flimsy reasons, which the show takes advantage of for plenty of questionable camera angles, particularly egregious is a shot of Hinako talking to Kuu where half the screen is filled by Hinako’s butt for no real reason. In an earlier episode she collapses with a fever, falling in a position that reveals her underwear, which the camera lingers on for just a liiitle too long. Several times throughout the series conversations randomly switch to apparently being held by the characters legs, for purely innocent reasons I’m sure. Episode 11 manages to make it 20 seconds before filling the entire screen with Hinako’s chest.

Now there’s nothing inherently wrong with fanservice stuff if that’s what you’re into. Horny anime have every right to exist, and people have every right to watch and enjoy them. But in this case it’s an issue. Because it’s jarring. In a show that’s mostly cute fluff and silly faces, random  perving on the underage cast just feels entirely out of place. It also leaves me questioning who it’s even for. People who’re into that kind of show can just go watch stuff that’s more explicitly (heh) aimed at that demographic, why sit through this when there are plenty of other, better options out there. (Not that there isn’t any overlap, people can in fact like multiple different things after all). And it just serves to undermine the show’s otherwise clean aesthetic.

Even the titular notebook gets in on the act, showing up in scene transitions with various things written in it, often entirely detached from what’s going on in the episode at any given time.

Overall Hinako Note is a jumbled mess of a show, with the potential to maybe be something good if it could decide what it wanted to be for more than a few minutes. The first episode does have ducks in it though, so points for that.

Hinako Note is too many things.