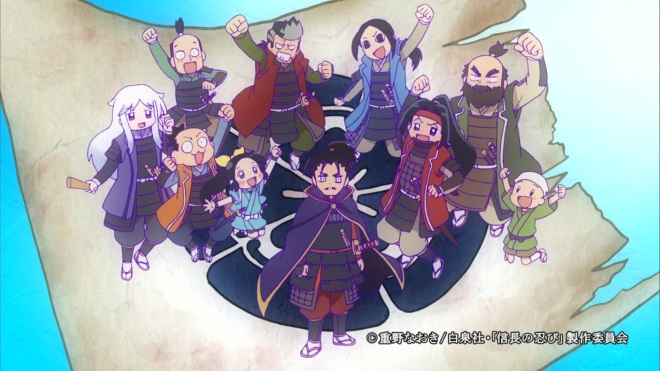 Welcome to the first installment of what I hope will become a regular thing, the Shorts Roundup for the Winter 2017 anime season.

I watch a lot of short anime.  As I’ve said previously, I try to watch all of them if I can, because they’re a great way of experiencing lots of different kinds of shows with a minimal time investment. A lot of them are kind of bad, but that’s fine, all you lose is a couple of minutes. And sometimes you strike gold.

Given that I  watch so many of the things, I thought I’d turn that into an excuse to actually write something for a change. So let’s get to it. 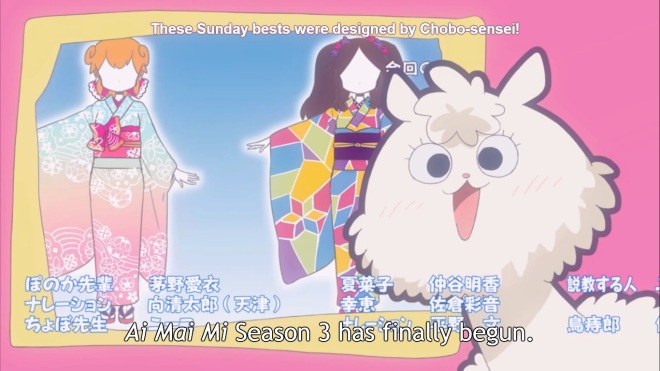 I don’t get Ai Mai Mi. I’ve tried but it’s just never clicked for me. Ai Mai Mi exists along the same axis as Teekyuu, a rapid fire gag comedy with aggressive disdain for concepts like coherency and logic. But where Teekyuu works for me Ai Mai Mi consistently falls flat for me for whatever reason. With the exception of one unusually funny episode towards the end I never really found any of the gags amusing, which has been par for the course since the first season sadly. 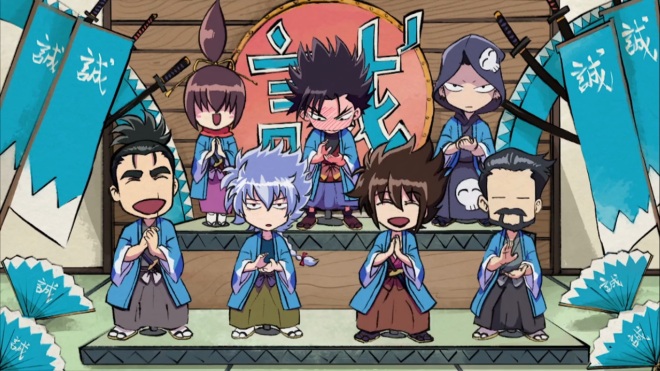 I watched all of Chiruran in a single sitting roughly 10 minutes before writing this segment. I’ve forgotten the majority of it already.  It’s a comedy short based on a non comedy manga about the Shinsengumi, Maybe it’d appeal to fans of the manga, but otherwise it’s just fluff. 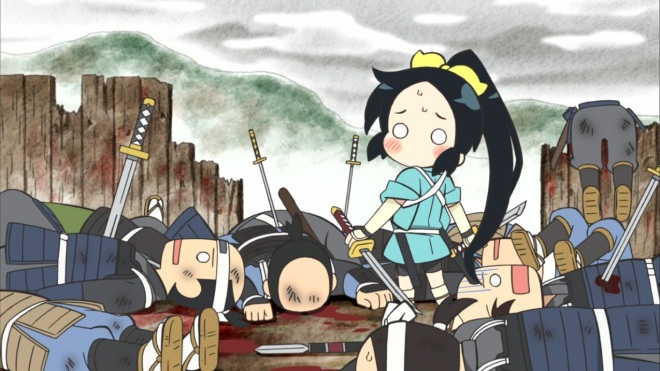 Technically this is an Autumn show but it finished in Winter so I’m including it. Besides, there were a lot of carryovers this season for whatever reason. This one definitely deserves to be included though, because  Nobunaga no Shinobi is one of the best shorts in years. A light hearted take on the Sengoku era; the series is cute, funny and super charming. The cutesy aesthetic manages to match the generally upbeat tone without undermining the show’s occasional bursts of unexpectedly brutal action. Highly recommended.

Another carryover from Autumn, Nyanbo is fine. A fairly meandering slice of life show about a group of strange little box cats who’re trying to build a spaceship, the show mostly just plows on ahead doing its own thing. The visual style is pretty unique though, with the CG Nyanbo superimposed over real life locations, which works surprisingly well. The Nyanbo have a plasticy look to them that makes them really feel like animate versions of the toys they’re based on.

Nyanko Days managed to instill one specific thought in me every single week; “This is too short”.  The low runtime of shorts can sometimes be an asset, especially when it comes to comedy shows with simplistic core gags. A joke that might get old if dragged out over 12 full length episodes is a lot more palatable in 3-4 minute bursts.

Sadly, Nyanko Days isn’t a comedy. As a dedicated slice of life show the 2 minutes (minus 30 seconds for the catchy ending theme) it got each week just weren’t enough to get attached to any of the characters, one girl who didn’t get properly introduced until episode 9 barely managed 2 minutes screen time before the end. I like what we got of Nyanko Days, I just wish we’d gotten a bit more of it.

How much Piace appeals to you is probably going to depend on how you feel about its hook. Set in an Italian resteraunt the series is (in a shocking twist) mostly about Italian cooking. It’s cute and servicable fluff for the most part with a likeable enough cast, but ultimately that’s not enough to make a series stand out, if cookery appeals to you you’ll probably get a lot more out of this than if you’re ambivalent towards the culinary arts.

Sengoku Choujuu Giga is certainly unique. A series of short skits featuring various Sengoku era figures as animals, presented in the style of the Chōjū-giga, this one’s niche enough to be more or less doomed to obscurity from the begining. Aside from the uniqueness factor the series is pretty variable in terms of actual entertainment value, although some of the jokes that rely on historical context work pretty well, as do some of the dumb visual gags, it has a tendancy to resort to poop jokes all too often.

With that said the show does offer one other unique element, it’s one of the few pieces of Sengoku media I’ve encountered that explicitly depicts Nobunaga as gay. Historically it was generally considered fact that he was in a relationship with his retainer, Ranmaru Mori. An element that gets brushed over in the majority of media depeicting Nobunaga, often because romance in general isn’t part of the story being told (although I can think of at least one example of Ranamaru being turned into a female love interest off the top of my head, which is uncool). but it’s still neat to see. Sadly the show’s tendancy to aim low undermines this, with the punchline to multiple episodes being “lol Nobunaga is gay, isn’t that weird”.  Ultimately it feels hard to recommend Sengoku Choujuu Giga to anyone really, because I have no idea who it’s really for.

Winter 2017 was a bit of a mixed bag in terms of quality, and the mediocre stuff stood out a bit more due to the sharp decrease in the number of shorts actually aired. I skipped two, but that only leaves 9 of the things, in contrast with Autumn’s 24. Spring looks like picking up again, with 15 scheduled to air (although a few of these appear to be kids shows doomed to never see the light of day outside of Japan). And we’re getting more Nobunaga no Shinobi! Which is good enough to carry a weak season on its own. Here’s hoping we get some other strong shorts to go with it.

One thought on “Winter 2017 Shorts Roundup”