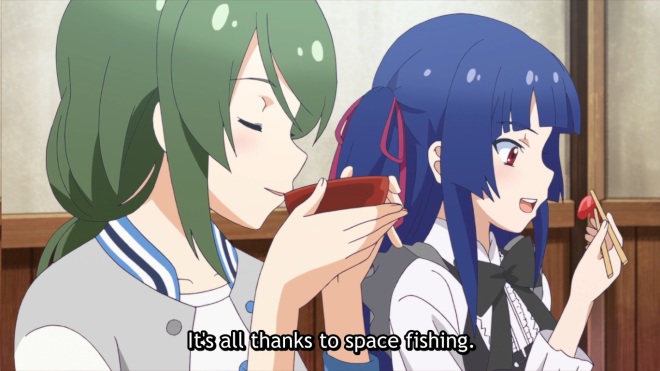 After last week’s frenetic premiere, Between the Sky and Sea slowed down a little this week, taking some time to establish more character relationships and a clear early series goal for the cast. It still managed to be low key absurd though. Opening on the fallout from last week’s disastrous fishing jaunt, which mostly serves to create a rivalry between Haru and Namino. Beyond that the episode is mostly devoted to introducing the characters a bit more, particularly Maiko and Makoto, who were unceremoniously sidelined last week. They also introduce a relatively low stakes upcoming conflict, with the team being dragged into another bet (that went so well last time) with the male fishermen over the use of the training pool. While relatively low stakes it at least gives the cast something to work towards before presumably some larger event enters the frame later on.

So far so standard. Outside of a throwaway comment about nobody realizing the giant crab from last week was in that particular fish orb (How could it get there without anyone knowing? Giant murderous crustaceans do not just spring from thin air and the fish in the space tanks have to be human created)  nothing particularly out there happens in the first half of the episode really. And then the gods show up again.

Around the halfway point the camera suddenly pans out from a TV set, to a room filled with the deities from the phone app sitting and watching the outside world. Because as it turns out that rather than being just another needless layer of complexity in the app based space fishing system these gods are actually totally real sentient beings that hang out in another world, with the app acting as a gateway. Once again this kind of just raises more questions than it answers; Who came up with this needlessly elaborate system? Why are people opening portals to another dimension solely for the purpose of fishing? Why not just use nets? In a way the commitment of the show’s humanity to devising incredibly elaborate and unnecessary solutions to relatively simple problems is admirable.

While there was definitely less of the crazy stuff to cover up the relatively standard core this week it was still reasonably enjoyable and continued to be just weird enough to be interesting. I do wonder how long it can sustain that ridiculousness though, since at this point the sheer absurdity of the world building is the most endearing thing about the show and once that novelty wears off it may end up falling over, but I’m definitely enjoying the ride so far.

Between the Sky and Sea episode 2: No Space Fishing Occurs