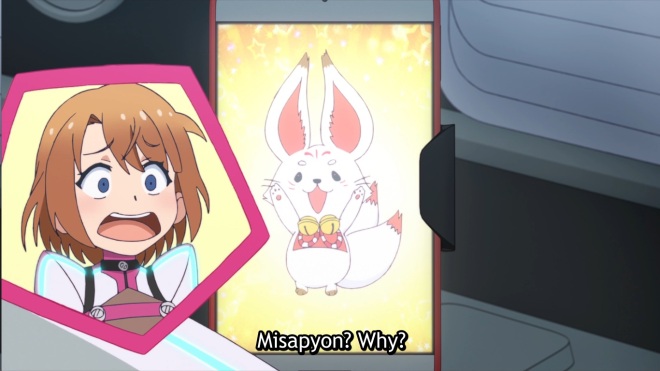 Rolling and getting something entirely different from what you wanted is very much the quintessential mobage experience. Silly gacha things aside this episode actually covered a surprising amount of ground.

Most of the episode was focused on the team’s continued attempts to patch things up between Haru and Namino, without much success. This primarily served as an excuse for a montage of Haru and co eating excessive amounts of pancakes, so that happened. While in some ways this kind of just felt like padding for time it did provide an excuse to set up new team member Ruby, who occasionally showed up watching the group from a distance throughout the episode.

This all culminates in a sort of maybe truce between Haru and Namino in the second half, which would be fine if the show hadn’t immediately had them fight again minutes later. Three episodes in and it already feels like the show is spinning its wheels a little on the character front, with the constant back and forth between Namino and Haru showing no real signs of resolving itself while continuing to sideline all the other characters. A quarter of the way through the show and I still have no real sense of what Maiko’s even like beyond “has a strong accent”.

They then sort of shoehorned the whole fishing contest thing that was set up last week into the last few minutes of the episode. This whole storyline was resolved surprisingly quickly given the amount of weight that had previously been given to it. Faced with a challenge obviously designed to make them fail the girls promptly did so. Only to be rescued by Ruby sort of wandering into the midst of things unannounced and accidentally winning due to the overpowered deity she randomly ended up with (new players who have no idea what they’re doing pulling top end characters is clearly another instance of the show being true to its mobage roots… or maybe not).

The show definitely feels like its already lost most of the momentum it had in the first episode, with the all consuming Haru/Namino conflict threatening to overwhelm everything else. Hopefully the introduction of Ruby and resolution of the training pool dispute will give the story a little more room to breathe but given next week is the obligatory beach episode already I’m starting to lose faith a little. At least they sort of technically did space fishing (without the space bit) this week!

Between the Sky and Sea episode 3: Accurate Portrayal of Gacha