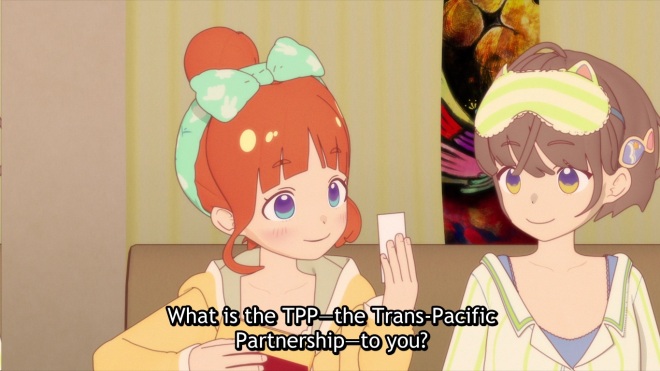 Well it sure has been a while. Between real life getting in the way and a sort of collapse of my desire to write after I couldn’t keep up with the weekly Endro! posts (Obviously those are no longer happening, but I do have a post about a specific character in the works which may or may not see the light of day at some point). I’ve been sitting with this half finished for a couple of months now. But it’s still technically the winter season so I’m not late with this yet! Fall was an unusually solid season for shorts, although I went in with unrealistically high expectations for one specific show the generally solid performance of everything else helped to cushion the blow of its being merely good. 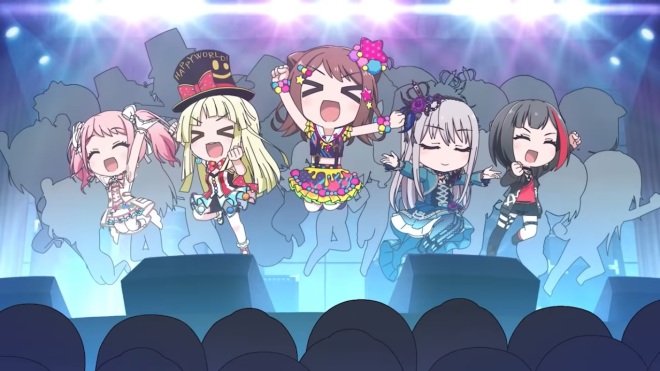 Continuing on from the previous season this series continued to be a consistently solid spinoff. That it maintained some level of ongoing plot helped a lot to contextualize characters I’m otherwise unfamiliar with, while not being overly central to the point of being obtrusive. I feel like I said most of what I had to about this in the previous roundup but my praise from there still applies. It’s just a really solid little show even without being already into BanG Dream!

Himote House is in some ways a victim of my own heightened expectations. Given its lineage as the latest gdgd adjacent show, featuring a cast of returning voice actresses who’d all worked on similar shows previously this one’s potential quality ceiling was incredibly high. Instead it was only pretty good. That I’m writing this post a few months on has honestly done a lot to make me reconsider my attitude towards the show originally. As it was airing I mostly just felt underwhelmed, for a series I had such high expectations to coast along mostly just being “Tesagure again” felt like a pretty huge letdown.

As time has passed though I’ve found myself looking back at Himote House with increasing fondness. Sure it didn’t push the boat out as much as it could have, but it was still a solidly made continuation of the concept of the earlier shows, the voice cast’s experience with these kinds of shows is really clear to see and they work well together, able to quickly shift the improv prompts into the weird non sequiturs that are at times definitely on par with earlier material. It also can’t be said that the series didn’t go into some of the weird directions I’ve come to expect, the bafflingly high concept episode 9 is absolutely one of the highlights and words can’t even begin to describe episode 11. Episode 11 is a thing of terrifying beauty.

More than anything Himote House reminds me of the first series of Tesagure, which while decent enough didn’t really sell me on the show as a favourite. It wasn’t till season 2 where they really started to play with the concept in interesting ways that I really fell in love with it. Himote House feels very similar, there are glimmers of something really special in this already decent series. All this goes to say I really hope we get more Himote House in future.

Another surprisingly solid spinoff, SideM’s short series succeeds in ways the Cinderella Girls shorts don’t quite manage. Maybe it’s because, similarly to Bang Dream, SideM often groups its characters by idol unit rather than in seemingly random arrangements of characters, which allows for  more focused skits with characters that fit into a distinct theme; which works as a shorthand to let the viewers at least establish some expectations for the characters at the beginning of a scene even if you’re not directly familiar with them. The relatively smaller cast also helps of course, which isn’t to say it isn’t big, the entire final episode is dedicated to one long roll call of every single one of SideM’s characters, it does indeed take the entire episode. Whatever the reason this manages to straddle the line just enough to not totally alienate me as an outsider, it’s in the similar “mild, inoffensive comedy skits” wheelhouse most of these spinoffs fall into but it’s good at being that and is an enjoyable enough time.

By far my favourite newcomer last year, Honda-San is great. Playing on the everyday idiosyncrasies of retail work in a way that manages to poke fun at the work itself without punching down at the people actually doing it, Honda-San is simultaneously incredibly relatable to someone who’s done any kind of retail work and steeped in the specific day to day minutiae of the book store in such a way that it feels like a genuine insight into a more niche subject area.

Back for its 2nd and possibly final cour Tiramisu Zwei is much the same as its previous season, a mostly affectionate parody of mecha anime tropes that mostly just plods along being pretty decent. The main shake up this season was shifting more of the focus away from Subaru and the crew of the Tiramisu in favour of his brother Isuzu and his teammates, who quite honestly are a more interesting bunch and definitely helped stop things from getting stale. It’s very much one of those “more of the same” followups though so if you liked the first season you’ll likely enjoy this one too.

Probably the strangest entry for this season, Jingai San is about a bunch of boys becoming the wives of various strange monsters. It’s fairly fluffy and nondescript but it’s still pretty cute.

All in all this was a surprisingly good season, given I was hoping Himote House would carry the whole thing on its own it’s nice that everything else turned out so enjoyable as well.