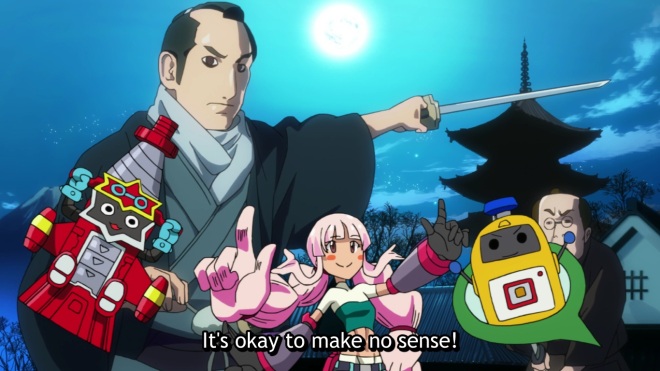 I’ll preface this by saying that I legitimately love Heybot, I’ll repeatedly call it “bad” in this post, but that’s absolutely a sincere compliment. Heybot is simultaneously one of the most incoherent and the most coherent anime I’ve ever encountered. While this might seem like an obviously self contradictory statement it’s one I’ll absolutely stand by, Heybot’s rapidfire nonsense might appear like so much arbitrary randomness to begin with but it’s actually incredibly internally consistent. Very little in the show is actually random, as much as it might seem like it at first.

I’ve come to realise over the years that the kind of anime I find most fascinating are those I’ve nebulously defined as “masterful jank”. Shows that by some metric or other are pretty clearly terrible, but which still manage to excel in some way, generally by actively using their badness in interesting ways. It’s the I won’t shut up about Straight Title Robot Anime  and why Minarai Diva ended up being one of the most impactful anime I saw last year. Heybot is unusual in that it falls into this category but from almost the exact opposite direction, where both the above mentioned shows were outright animated in Mikumikudance, and look about as terrible and offputting as that would lead you to expect. Heybot, on the other hand, is an actually well produced show with a clear level of time and effort put into making it at least competent. That level of production compared the other shows I lump into this category would probably disqualify it if not for how Heybot actually uses this polish. Heybot is “bad”. 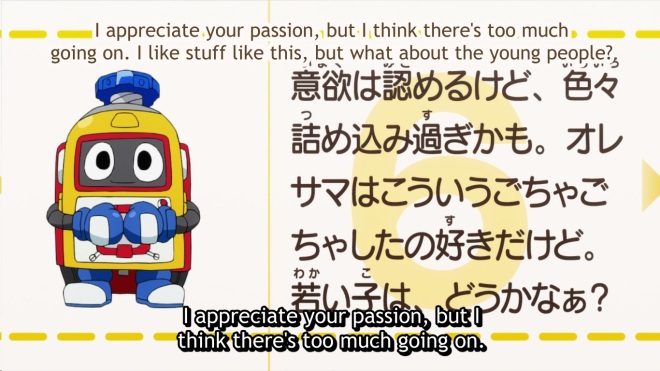 For all the effort that’s clearly gone into it it’s a kids show full of toilet humour, offputting designs, irredeemably self centered main characters and seemingly arbitrary cutaway gags filled with (almost exclusively) age inappropriate pop culture references. It alternates between aggressively shoving its nature as a toy advert in the viewer’s face and going out of its way to make said toys look unappealing. And that’s why it’s great. Heybot is bad, but it’s bad on purpose. And it’s absurdly good at being bad. What really makes it shine though is that this all has a point. It’s not just plumbing the depths of “how not to do this kind of show” for the sake of it, it’s building a story without actually showing you any of it. 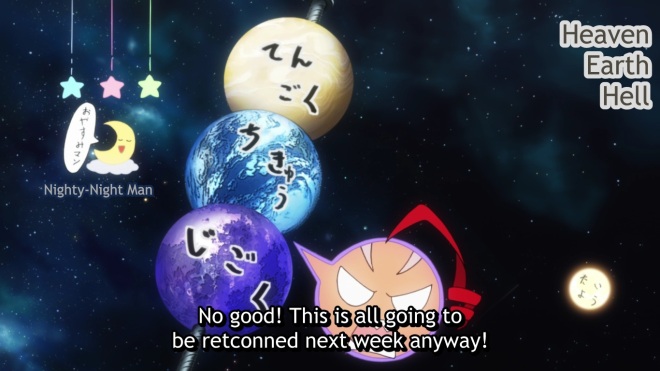 Heybot’s actual story is barely present in its 50 episode run, the entire first half of the show features almost no overt reference to the ridiculously large scale events that are taking place, despite the fact that they’re happening right in front of you. Heybot’s veneer of arbitrary lolrandom humour allows it to hide its core story in plain sight. The repeated cutaway gags serve a purpose beyond just being vehicles for toilet humour. The secret is in the show’s use of continuity. Continuity in Heybot is a malleable thing, while major plot developments like the appearance of a new main character will carry over, most of what happens on the surface level of any given episode will have reverted to the status quo by the next, it’s a long running kids show after all. A fact which is entirely known to the entire cast, and at times actively exploited by them. This does lead to one of the standout episodes; where a sudden freak enforcement of the ending of a previous episode results in Nejiru and Heybot having to carry out a prison break, which they naturally achieve by exploiting the newly extant continuity to form an escape plan built around callbacks to extremely inane events, some of which happened more than 30 episodes prior. Naturally everything is back to normal by the next episode of course, and the prison break never comes up again. The one episode that actually directly relies on the events of its predecessors is also entirely irrelevant to the plot. What isn’t irrelevant to the plot though, is everything else. Because the story is hiding in plain sight. 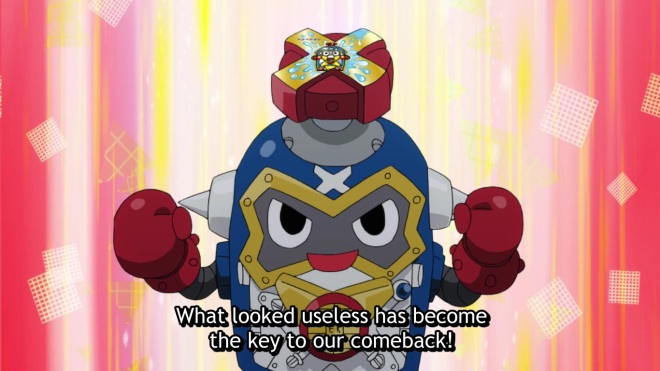 The show’s ubiquitous background and cutaway gags are actually the main vehicle by which it tells its story, outside of a few very clearly signified episodes which actually exist to further the story (“Ah, it’s a plot episode”. I thought to myself as Lord Nejikill crawled out of Nejiru’s toilet) the real development happens in these gags. A seemingly arbitrary one liner will suddenly be recontextualised 30 episodes later, or a character previously only existing in cutaways will appear in a significant role, these gags act to prime you for their later importance. It doesn’t feel like an out of nowhere revelation when giant monster lady Turuko turns out to be part of the ominous galactic council that’s been watching over events from the shadows because well, she’s always been around, manifesting for seemingly no reason in various episodes. And that’s how Heybot tells its story, you’ve already seen the pieces, you just didn’t know they were relevant. I found myself fairly consistently figuring things out just moments before the show confirmed them, a trend which the show at times seemed to anticipate and subvert, I worked out who the VocaReemans actually were exactly as they began to combine, only to have said combination result in something entirely different because having it work at that point wouldn’t serve any purpose when you could just have them transform into something more in keeping with their usual uselessness.

The series rapidfire barrage of dumb puns and jokes creates an atmosphere where nothing ever feels entirely out of place, so you just accept that any given thing is part of a joke which may or may not land. You’re encouraged to not connect the dots so that when the show does it for you it feels revelatory. When Princess Kathleena, a character who despite sharing an identical character design to the heroine Kathleena, has seemingly nothing whatsoever to do with her (naturally they meet later on to the utter confusion of regular Kathleena) appeared I assumed that it was just another self referential gag about reused character designs, the show has plenty of those after all. Once again she’s part of the planetary council (everyone’s on that thing I swear). Each reveal is a punchline in and of itself, recontextualising the previous role of a character to sometimes ridiculous degrees. The episode where Heybot is abducted and Nejiru fails to notice and carries on conversing with the farting Macaroni works as a joke on its own; Reducing Heybot down to his most over exagerated trait, it’s farting, it must be Heybot. And then some 40 episodes later another throwaway line establishes that Macaroni is actually an iteration of Heybot, Nejiru might just have been being an oblivious dumbass like he so often is but he was somehow also right.

Somehow even the side characters who don’t turn out important manage to have character arcs within their recurring cutaways. Mura Mura Chori might be a one episode character mostly there to setup an obvious punchline about people not necessarily being who they say they are online, but she and Suchat do in fact end up together, to the point where they have children, a story told entirely over the course of about 3 cutaways that only last a few seconds each. This treatment extends to just about every character, nobody just appears once and stops being relevant, everyone gets a chance to do something, to have some kind of continuing contribution.

And all these disparate and seemingly random elements come together into a story that’s impressively coherent despite its ridiculous scale,  encompassing time loops, galactic annihilation and tragic romances between lead characters who’ve long since been forced out of that role. The looping even incorporates more of the cutaways, those weird alternate Nejiru and Heybot designs aren’t just visual gags, they’re previous iterations of the characters, all of who existed at some point in an uncountably long sequence of events. 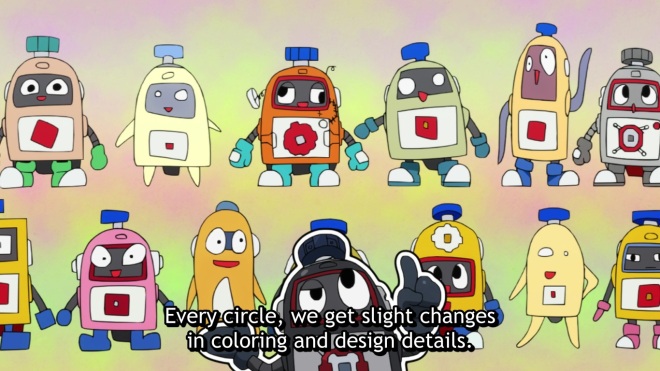 I haven’t even touched on a fraction of the wild nonsense this show has going on, as I said on twitter about the very first episode; “There is a lot happening and I can’t adequately convey any of it.”  At this point I can at least make an attempt but it’s always going to pale in comparison to experiencing the show for yourself. Ultimately though, what makes Heybot really shine for me is how supremely in control of itself the show feels. Somehow, almost every nonsense element manages to feed back into something that shouldn’t make sense, a plot comprised of hundreds of disparate threads of out of context fart jokes and intentionally forced memes inexplicably builds to a conclusion that not only works but feels genuinely well built up. Heybot’s meta narrative manages to take a wacky pile of random stupidity and turn it into something which probably couldn’t work if it were made any other way. Sometimes it’s okay to throw reasonable storytelling conventions out the window, sometimes it’s okay to hide your story in plain sight with an illusion of irrelevance. Sometimes, well, 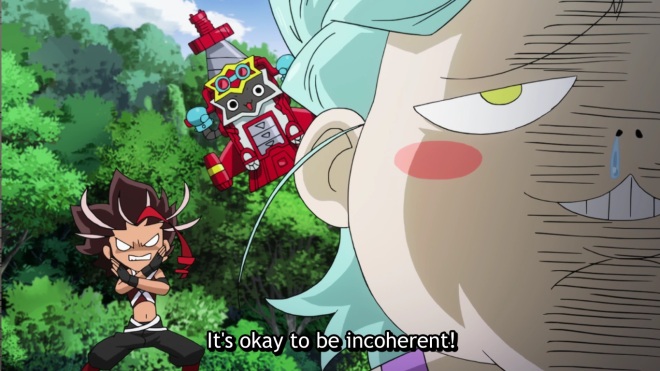 And I’d sure as hey buy that for a dollar. 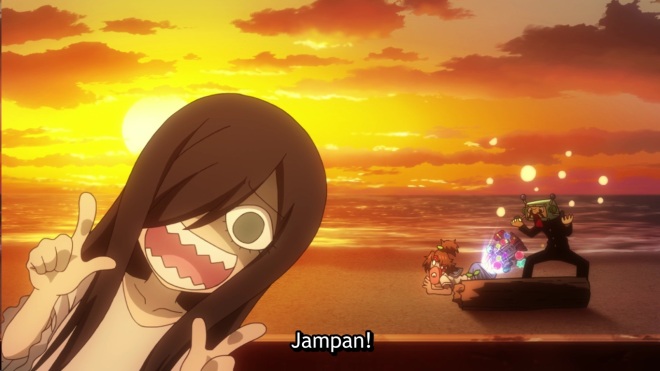 “It’s okay to be incoherent” – Heybot! and the art of nonsense

2 thoughts on ““It’s okay to be incoherent” – Heybot! and the art of nonsense”