Well, this is more than a month later than planned due to persistent internet issues, but let’s get to it anyway. This season’s shorts were kind of a mixed bag without any major high points and a couple of real lows, but there was some good stuff around regardless.

Starting off on a strong note. 100% Pascal Sensei is what I imagine Heybot to be like based on other people tweeting about Heybot. Pascal Sensei follows a group of schoolkids who arrive for the start of the new term only to discover their teacher has been replaced with the titular Pascal, a strange yellow creature who’s somehow wrangled the job despite being entirely unsuited for it. Each episode is  split into two to three segments, the first half featuring the class getting into some sort of absurd situation as a result of Pascal’s incompetence, followed by a “Perfect Plate” episode, set in “Pascaworld” a fantasy world inhabited entirely by Pascal variants. Weirdly enough, despite the fantastical setting the Perfect Plates are usually the weakest parts of each episode, often just falling back on the same few jokes. The regular sections on the other hand tend to be a lot more creative, sometimes setting up elaborate piles of jokes  purely to justify a single visual gag a few episodes later. It’s carrying on into the new season and I’d say it’s definitely worth catching up on if you like some dumb, absurd humour.

Cinderella Girls Theater is not for me. Much like last season’s Chiruran 1/2 it feels like a series made for existing fans of the franchise. Since my engagement with the IM@S franchise and its approximately 5 billion characters comes purely from Granblue crossovers I’m really not the best person to judge it. As a stand alone series it’s somewhat hard to get into, with each episode segment divided into 2-3 skits (plus an extra web short featuring a 4th) focusing on one or more of the series many characters. Not being familiar with the majority of them meant each skit was trying to introduce each character in about a minute and a half, which isn’t ideal really. The reactions I saw from fans of the franchise proper were generally positive though, so if you like IM@S it’s probably worth a look.

Kenka Bancho Otome’s lineage is somewhat odd. Kenka Bancho is a series of beat em up games where manly delinquents punch each other to become the best delinquent. Naturally they made an otome game spinoff, which they then decided to animate. And it turned out pretty OK. Through a highly contrived sequence of events, protagonist Hinako is made to swap places with her long-lost twin brother Hikaru and attend his school in his place. Once there she meets (and punches) a series of highly dateable boys in her quest to become top delinquent in the school. The boys tend to fall into standard otome game  tropes, but they’re a likeable enough bunch for the most part. The highlight of the show is definitely some surprisingly well done fight scenes, they’re short but they do a great job of conveying the intensity of the action. There’s an odd framing device where the show will occasionally cut to the various characters in an interview setting, recounting the story as if it’s already happened, but it never really goes anywhere so it’s kind of just there. 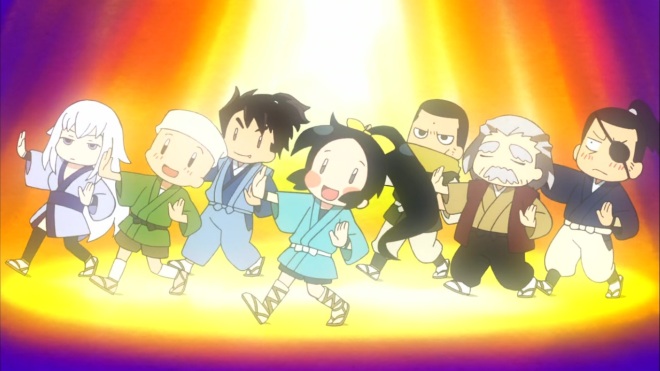 It’s still going, and it’s still good.  The show did stumble a little at the beginning of the season, introducing several new characters who were either creepy or just annoying. It’s regained its footing now and continues to be one of my favourite ongoing series.

Chi Chan is alright. The show follows a young girl named Yuuka with a penchant for helping those in need. Encountering an underground dweller named  Kahahhohoyononhiidechinusuyakenwayorunikejoronesu (Chi chan for short), who’s found himself trapped on the surface, she takes him home to live with her. She’s also done the same thing for an alien named Uc chan who crash landed nearby.

The Silver Guardian isn’t great, and it probably shouldn’t be a short. Silver Guardian seems to be trying to be a farily standard shonen action series, but it seems to be entirely confused about its own priorities. In theory it might be a more coherent show if it had regular length episodes, but honestly the problems run deeper than the runtime.

The plot has no idea where it’s going, spending the first 4 episodes not really introducing the protagonist, Suigin. His only defining traits are “owns a cat”, “has a lot of part time jobs” and “apparently has no hobbies except playing an MMORPG”. Through this MMO he indirectly meets heroine Riku Rei (for some reason everyone always refers to her by her full name), and they hang out in the game whilst Suigin creepily oggles her in real life since in an incredibly convenient coincidence she attends the same school as him. Then the MMO gets suddenly shut down, a new game is released which might be a portal to another world, and has mechanics that make no sense but is apparently a very big deal. The developer of said game is Riku Rei’s father, who’s then revealed to have just adopted her and he’s actually Suigin’s grandfather he’s forgotten about. And then Suigin ends up sucked into the game after Riku Rei is kidnapped by a guy with a silly name whilst in the midst of being kidnapped by an unrelated group. And then Grandpa is alive as a cyber ghost again, and there’s a catgirl, and then cyber grandpa dies again after revealing that he’s actually some sort of tomb guardian in this other world which may or may not still be a game.

A lot happens in Silver Guardian and none of it makes any sense. The show introduces new characters as super important only to imediately toss them aside, and can’t seem to settle into any kind of coherent story. By the end of the first season very little has actually happend. There’s a second season due in Autumn but I don’t imagine it’s going to help.

We Love Rice is a very strange show. It’s hard to describe just how odd it can get at times. The basic premise is that the cast, all named after varieties of rice, attend rice school so they can become good at “harvest shows”, vaguely definied things which look like short music videos, which somehow have the ability to alter reality. At one point a guy harvest shows so hard that he stops a train from running over a puppy. They’re also at war with bread over who’s the best grain based foodstuff. At times it’s funny for the absurdity of it all, and whoever did the subtitling tried their best to convey the relentless rice puns, but mostly it’s just kind of baffling. In a neat touch the end credits play over sped up tutorials for rice based recipes, which is nice if you’re into cookery.

Well this sure was a surprise. The original World Fool news was originally released as a web short in 2013 before being aired on tv a year  later, both times to very little fanfare. And then they suddenly gave us a sequel out of nowhere three years later.  Picking up a while after the end to the original series, World Fool News Part II is more of the same. It’s got an off kilter rhythm to its comedy, and often the jokes don’t really go anywhere, seeming to peter off without any real punchline. It’s definitely not going to be for everyone but it’s unique and happy to just keep doing its own thing. If you liked the original you’ll probably like the second season. 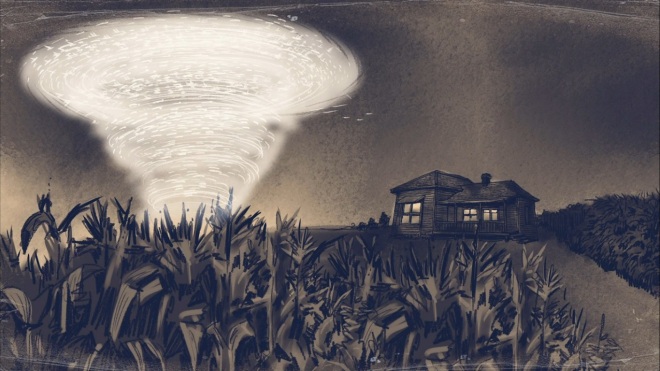 And bringing up the rear we have something that barely counts as anime. Billed as an anthology of short horror stories Yamizukan’s episodes are comprised of still images with occasional camera pans and voice acting. One of the episodes even uses real photos instead of drawings. Each episode has a different artist, but it sort of forms a cohesive pulpy aesthetic which is definitely what the show was going for. Sadly the actual content of the stories is universaly poor. Half the stories in Yamizukan feel like rejected SCP Foundation entries, they’re dull and meandering, and end in twists that are often nonsensical and never manage to be particularly scary. Even the narator seems disinterested, they were probably going for detached but he just sounds bored most of the time.

And that’s the lot. This season was kind of all over the place in terms of quality but that’s often the case. Since this post is so late I’ve made a start on a couple of the new batch, one is OK, one is very not, but we’ll get to that in a few months. More importantly,  Teekyu’s back, yay! 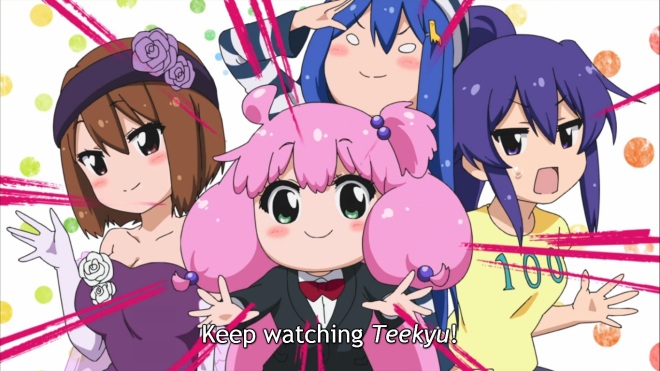